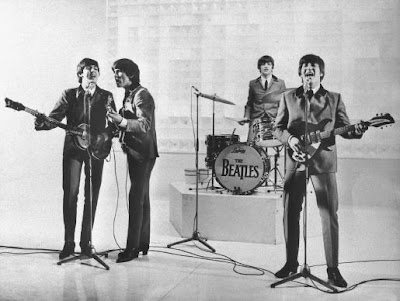 HOW I MET MY FIRST WIFE: A LAS VEGAS STORY

(1989 That afternoon, If I Fell)
My first day in Las Vegas was a hot one. Of course, describing a day in the Nevada desert as hot is pretty much a given, but the excessive temperature didn’t bother me in the least. I was on such a high from being in such an exciting place. I tried to rest in my hotel room before going to the show that evening, but who could sleep here? Then I went to the Imperial Palace bar and had a couple of shots. But who could get drunk here? What a place! To paraphrase what Wilfred Brambell said in A Hard Day’s Night,”it was time to go parading…before it’s too late.”

I had flown in that morning and was hoping to meet my friend who was scheduled to arrive in town that afternoon. Of course, his traveling by car practically across the country made it difficult for him to judge his arrival time. But if he didn’t make it in time, I was going to the show without him.

My first real chance to see a Beatle in concert had been Paul McCartney during Wings Over America tour in 1976. I didn’t really get into the Beatles until shortly after that, so I was tad late there. Well, I wasn’t going to be late this time. This might be my only chance. This wasn’t Paul, but it was an ex-Beatle. This was Ringo. Ringo Starr and his All-Starr Band.

(1989 That evening, Things We Said Today)
The temperature was cool inside the Aladdin Theater and was a welcome contrast to the dry Vegas night. I admit I was happy to get off the strip at that point. As I walked pass the roulette wheels and Blackjack tables, I shook my head. Already lost there this afternoon. They’d have to wait a couple more hours before getting any more donations from me.

I approached the booth in front of the theater and purchased my ticket. Thank God it wasn’t sold out, as it certainly could have been. That would have just been my luck, but fortunately I got there early. The theater itself was homier than I would have thought. It reminded me a little of Atlanta’s Fox Theater, only a little smaller. There were plenty of good seats available it seemed. This would be fine. I took a detour to the restroom and, you may not believe that I ran into none other than Mr. Billy Preston! I still pictured him as having that big afro he sported on the inside cover of the Let It Be album. But-no-that was yesterday. He smiled at me and we exchanged greetings as he passed.

I just talked to the fifth Beatle!

Pretty soon I was going to see the fourth.

I was anxious to get to my seat. Sorry my friend was going to miss it.

More people were finding their seats as I went back inside. I scurried to one a few rows back and close to the center. This would be fine. I looked to my left and saw no one sitting next to me. More elbow room.

I looked to my right.

I pause here for a moment to acknowledge that this was the first time I ever saw her.

I usually try to not be that obvious, but when I first gazed upon her, I felt like my eyes were popping out of my head as if I were in a 1940’s Warner Brothers cartoon. The wavy blonde hair, the sparkling eyes, the button nose and that smile. I was a dead man after seeing that smile. I was one seat away from her and since she had already noticed me staring at her, I really had no alternative but to go forward. I was desperately thinking of what to say, but before I could get anything out, she was the one that broke the ice.

“This is pretty exciting. Just think-One of the Beatles, live in concert!”

I smiled and nodded in her direction.

Say something to her, you moron! I said only to myself.

“I’d rather see Ringo than McCartney to tell you the truth,” she said.

“Me, too,” I finally managed to get out, hoping she didn’t notice the crack in my voice.

Me, too? My first line to this perfect creature was no better than me, too?

But it was a start…and I got better. I told her where I was from and how I got to this place, both physically and mentally.

She said she was from Indiana, had just broken up with her boyfriend and when she saw that Ringo was playing Las Vegas, she impulsively hopped a plane to fun city.

Her name was Michelle. She pronounced it Mee-chelle, just like the Beatles song. I thought she was just putting me on about the name. She took out her driver’s license and showed it to me. Michelle McGuire of Gary, Indiana. She was perfect no matter what her name was. Maybe not perfect in the since of being on the cover of a women’s fashion magazine, but perfect for me. This was it. This was the one. I had to put the right bait on my metaphorical fishing pole of love, cast my line and reel her in. If I failed, I’d only regret it for the rest of my life.

I wasn’t that great at small talk, so I decided to test her Beatles I. Q.

“What’s your favorite Beatles album,” I asked with that noticeable, at least I thought it was noticeable, awkward strain in my voice.

“Well if you are talking about British releases,” Mee-chelle said, “ I’d go with Rubber Soul. The American release has too many of the songs cut out. If I Needed Someone and Nowhere Man have got to be part of the musical mix. How about you?”

Hoo! Mee-chelle knew her Beatles. I should have guessed she’d pick the album with Michelle on it. I said Sgt. Pepper’s was my favorite. It was kind of a stock answer to the question, not as good as hers, but I decided to try again.

I opened my mouth, but she was a step ahead of me and asked me what my favorite Beatles movie was.

“A Hard Day’s Night.” I said this like there could be no other answer.

“Help?” I countered. “That was just a stoned romp. A James Bond sendup that doesn’t hold up today. It’s worth viewing to see The Beatles during that period, but it’s not on a level of A Hard Day’s Night.”

She didn’t say anything to my response. How stupid of me to criticize her choice! Was I trying to be Gene Shalit or was I trying to woo the woman of my dreams?

“That’s easy,” she said. Band on the Run. Listened to it at least a hundred times. You?

I hesitated. I would have said Band on the Run too. But I needed a different answer.

Wild Life? Why did I say that? I hated that album! Why in God’s name did I say Wild Life? Was my psyche trying to sabotage me?

“Really?” she said. “The one with Mary Had a Little Lamb on it? “That’s a surprising answer.”

An uncomfortable moment of silence hung over us. Did saying the two words Wild Life forever kill my chances with Mee-chelle? I pictured myself on my deathbed at 100 and my last words being “Why did I say Wild Life?”

She broke the silence with that smile that made me feel like I was going to melt into my seat like a pack of M & M’s dropped on the pavement of the Las Vegas strip. “Ok, favorite John Lennon album.”

I was ready this time. “Plastic Ono Band. It’s so gut wrenching.”

“Too much of that primal scream goes a long way,” she said. “I’ll just be predictable and go with Imagine.”

I nodded. I think I won that round.

I was going to ask about her favorite George Harrison album, and come back with All Things Must Pass. But she beat me to the punch, “Favorite George album?”

Once again I blurted out. "The Concert for Bangladesh!" It wasn’t what I was planning to say, but wasn’t a bad answer.

“No, I’d go with All Things Must Pass, too much Dylan for my tastes on Bangladesh,” Mee-chelle said.

Not a Dylan fan. A potential issue down the road, but hardly a deal breaker.

I decided to just move on to the next question. “Ringo album?”

She cocked an eyebrow as she looked at me. We both said, “Ringo,” at the same time, indicating Ringo’s eponymously titled album from 1973. That one was a draw. A happy draw.

The lights at the Aladdin started to dim as the curtains parted. I tried to quickly ask her where she was staying. What if the concert went on and I lost her at the end. I pictured myself roaming from casino to casino yelling out, “Mee-chelle! Mee-chelle! Ma Belle.”

She couldn’t hear me as Clarence Clemons, Billy Preston, Dr. John, Nils Lofgren and others began to sing the chorus to It Don’t Come Easy. Then Ringo Starr, AKA Richard Starkey, bounded out on stage in an ostentatious manner that seemed most appropriate considering the city which we were in. I was thrilled to be seeing a Beatle in concert. But I was more thrilled when I felt Michelle’s hand slip into mine as the concert began. I hoped at that moment she would never let go.


Postscript
Las Vegas, 1990
And I Love Her.
Mee-chelle and I returned to Las Vegas to a little chapel on the top floor of the Imperial Palace where she became my wife on the anniversary of the day we met.

Las Vegas, 1991
This Boy
We decided to spend our first anniversary in the town we met. We also wanted some together time before the upcoming event that we knew would change our lives forever. Needless to say, fate decided that Mee-chelle would go into labor prematurely and our baby boy, who we named John Paul, could always refer to Las Vegas, Nevada as his birthplace. And yes, we joked that the next one we had would be named George Ringo.

Las Vegas,1993
A Hard Day’s Night The rest of the story is rather sordid. It involves a lot of finger pointing, accusations and ended up with me running off with John Paul to, believe it or not, Las Vegas. Extradition papers. Me worrying about really having to do some serious jail time. The bitch telling all those lies…Sorry, I got carried away. Anyway, despite all that, when I think about Mee-chelle I still try to remember the good times. Now if you’ll excuse me, I’m going to go off parading before it’s too late. 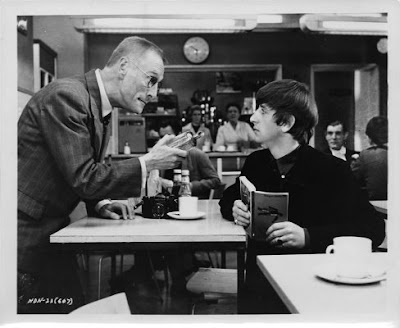 Posted by 1001: A Film Odyssey is produced, directed and written by Chris, a librarian. at 3:53 PM