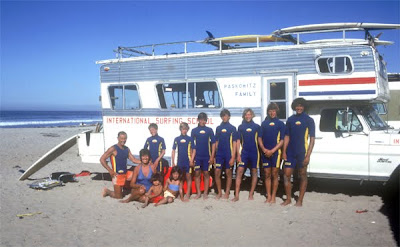 I honestly didn’t know what to expect when I plucked the documentary Surfwise from the 1001 Movie list* for my next film to view. In fact, I didn’t even know it was a documentary until I began watching it. So much for background research.

The film is about Doc Paskowitz, a doctor turned bohemian, who lived out of a camper during the 60’s and 70’s with his wife and nine children (eight of which were boys). The children didn’t attend school, instead traveling around the country (and beyond) with their parents learning about surfing, life and how to live comfortably in a twenty-four foot camper with a double digit number of people.

A retrospective of Doc and his family fill the first half of this film. The second half has more on what his children are doing now, how their upbringing affected them and gives the audience space to make judgments on Doc and his lifestyle choice.

Another surfing documentary that didn’t make the 1001 cut is The Endless Summer. I remember first seeing this on television during the 70’s and have watched parts of it a couple of times since. I always thought you could boil the plot down to a couple of guys travel around the world looking for the perfect wave. But it’s a bit more than that. It’s very…what’s the word? Zen. Yes, it’s a very Zen movie. Mike Hynson and Robert August are two surfers in their early twenties who attempt to travel the world over a series of months following the summer as they go. They are accompanied by filmmaker/wisecracking narrator Bruce Brown. The boys spend a lot of time in Africa. Their encounters with the friendly natives of Ghana, who have never seen a surfboard before, are one of the highlights of the film. Another obvious highlight is when they walk through a South African desert to find (drum roll please) the perfect wave. Waves so long and perfect you would think they were out of a machine. Waves that you can ride so long that Bruce Brown actually runs out of film before he can show you an entire ride. Waves that might actually make me consider picking up a surfboard...well, not quite.

On the lighter side, we see the boys complaining about the prices of things in the world ($1 dollar coffee, $1 dollar a gallon gasoline, and a luxurious suite that is a whopping $30 a night. Hey, this is 1966! What a rip-off!). We also see some other surfers of the day shooting the curl or hanging ten and the whole thing is in good fun.

Not to get too deep here, but when you enter The Endless Summer you allow yourself to forever keep searching for the perfect wave and if you keep going around the world, you may even stay forever young.

*This film is listed in a supplementary 1001 Movie list I saw on the internet, but haven’t been able to find it in an actual edition of the book. Go figure.

**Nope, still can’t find it in any book. 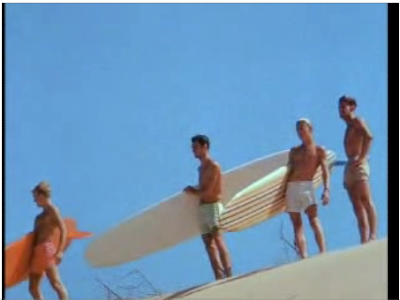 Posted by 1001: A Film Odyssey is produced, directed and written by Chris, a librarian. at 9:42 AM