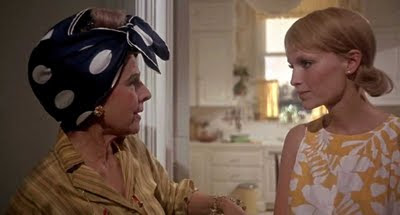 Previous viewings: One, I think.

I say I saw this once, but it was so long ago and it would have had to be on TV, so that I’d almost be better off saying I’d never seen it before. However, I always recognized (probably thanks to MAD magazine) pop culture references to Rosemary’s Baby, usually dealing with something within a mysterious baby carriage or just a reference to Mia Farrow’s extremely short haircut.

The Exorcist factor: I do remember quite vividly when The Exorcist came out (1973) and though I may have been a bit too impressionable to see it at the time, I nevertheless did see it and it left quite the impression on me.

The audience reaction to Rosemary’s Baby was a probably similar to that of The Exorcist after its release, though too a lesser degree. Of course, at the time of Rosemary's Baby's release in 1968 I was basically just watching Disney movies, stories about otters or dubbed Swedish versions of Hansel and Gretel.

Elisha Cook Jr.-I did have to mention this film marks the last appearance on a 1001 film from character actor specialist Elisha Cook Jr. He doesn’t really have much of a part here, but Elisha does what he does best: supplies the exposition for the main characters. He is in the very first scene, showing John Cassavetes and Mia Farrow around their apartment. He tells them about the place and questions why the previous tenant left her large dresser in front of her closet. We know that issue will come up later. Elisha hath put forth the question and the film shall eventually answer it.

Suspense: I do like the way the film builds suspense by its slow unraveling of plot threads. It is also not really very graphic when it comes right down to it, that is unless you count the dreamlike scenes with witches, which are admittedly pretty disturbing.

But would I recommend it? Would it be in my book?

Yes. Definitely a high ranking in both the suspense and horror genre.

Posted by 1001: A Film Odyssey is produced, directed and written by Chris, a librarian. at 3:02 PM