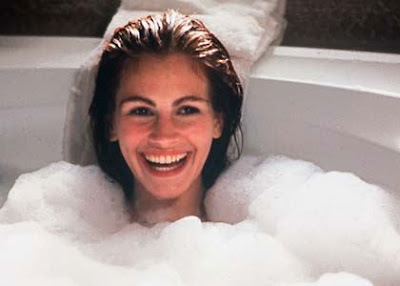 The main female character is a hooker. (I stress female to leave out that other Richard Gere movie, American Gigolo.)

It has George Costanza from Senifeld, so you the viewer can throw in some George lines if you’re bored such as “I was in the pool!” or “Van Delay! Van Delay!

It’s also interesting that the movie has Seinfeld's actual George Costanza (Jason Alexander) as well as the almost choice for George Costanza, Larry Miller, who has a pretty funny role as a very compliant salesman. Well, it's kind of interesting.

Speaking of American Gigolo, If I recall in that film, murder suspect Richard Gere gave advice on how to dress to detective Hector Eliznondo. In Pretty Woman, Hector Elinzondo sends Gere’s girlfriend/hooker/niece Julia Roberts to the proper store to get suitably dressed. I think I remember that correctly.

Also, we have the last or nearly the last screen appearance of film veteran Ralph Bellamy. I last saw Bellamy in the 1940 musical Dance, Girl, Dance with Lucille Ball. Lucy has a cameo of sorts in Pretty Woman during the scene when Julia Roberts is watching an I Love Lucy rerun. I'm still not sure if that would count as a connection in the Six Degrees of Kevin Bacon game.

We also have a scene with Julia watching an Audrey Hepburn/Cary Grant movie making the critical comparisons between her in this film and Audrey in Roman Holiday more obvious…which leads us to the next film on the list…
Posted by 1001: A Film Odyssey is produced, directed and written by Chris, a librarian. at 3:25 PM