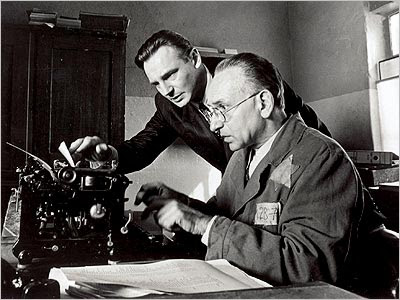 (Rod and Chip Go To the Movies, Part 5: Revelations)

Rod and I met that night at the Phipps Plaza Mall to see a movie. It seemed like an impersonal if not corporate place to go see a film, but the theater was well kept, I must admit. Besides, I hadn’t been to see anything with Rod in quite awhile and was looking forward to his company. As we approached the ticket booth, he surprised me with his question.

Chip: C’mon. We haven’t seen a movie together in over a year. Don’t you think we need something with a little more substance?

Rod: (Eyeing the marquee) I know what you’re thinking, but sometimes I’m just not in the mood to see a holocaust movie. Actually, that’s most of the time.

Chip: And we went to see Mother’s Day.

Rod: Hey!..I liked Mother’s Day. It had a certain appeal of its own. Not quite good and not quite campy, but somewhere in that happy space in-between. It was no Night of the Living Dead, but what is? But, uh. Yeah. I can’t really categorize it. It was a limbo movie.

Chip: A limbo movie? Yeah, I guess. Kind of like that movie Bug. You know, the one where the bugs begin to talk and spell words and take over the town and cause earthquakes.

Rod: No that one was closer to bad.

Chip: Anyway, my point is that we went to see what you wanted to see that night. Don’t you think you owe me?

Rod: No I don’t. But if you’re pea pickin’ heart is set on Schindler’s List, I guess I can tough it out.

Rod and Chip go buy a coke and Raisinets and some Chocolate Stars before heading into the theater. After finding a couple of seats near the middle of the theater, Chip notices Rod staring at an empty seat.

Chip: What are you staring at?

Rod: What? Oh, nothing...Hey, do you remember that guy Frank that we always ran into when we went to the Silver Screen or the Rhodes Theater?

Chip: Frank n’ Furter? How could I forget Frank n’ Furter? Or when we went to see Rocky Horror at a matinee and those people threatened Frank’s friends when they kept talking back to the screen?

Rod: (Imitating Chip) “It’s part of the show. Let them speak!” Yes, I’ll never forget you yelling that out. A rare public political statement from our man Chip.

Chip: That just kind of came out of me. And I’ll never forget my applause. And that actually shut them up if you recall and Frank acknowledged me with just a slight nod of his head.

Rod: Yes, you are now world renowned for the preservation of performance art in movie theaters everywhere.

Chip: (Sarcastically) You mock me sir! Like I always tell you. If you mock, I won't share. Anyway, what made you think about him?

Rod: Hang on. The movie is about to start.

After watching Schindler’s List, Rod and Chip leave the theater and sit down on a bench outside the mall.

Chip: That was something else. (Rod doesn’t respond) What did you think, old man?

Rod: I think I need to do something.

Chip: Bathroom is right around the corner…. (Rod doesn’t respond) Fine, I’ll bite. What kind of something do you need to do, Mr. Rod?

Rod: How many movies have you and I gone to see together over the years?

Chip: I don’t keep a running total. I do know the first one we saw was L'Avventura. I confess I didn't like it at age 14. Of course, it's one of my all-time favorites now. As far as a total number, I'm sure it’s well into the hundreds by now, I’m sure.

Rod: Yeah, in the hundreds. That sounds about right.

Chip: So what is it you want to do?

Rod: I think I’m going on that dig out West.

Chip: You mean actual archaeology? Use your degree? I thought you said you weren’t interested in that.

Rod: Look, Chip. We aren’t nineteen anymore. I have this opportunity and I think I should do it. It’s a bit romantic to say that I want to find the origin of man or whatever may else may rise to the surface beneath a pickaxe. But it would be a first hand look into our past. How man became what he is today. For better or for worse.

Chip: Boy, all these life revelations just because we saw this movie. I’m wishing we had just gone to see Dumb and Dumber now.

Rod: You know who I saw in the theater? In that empty seat?

Chip: No. But I think you’re going to tell me.

Rod: Frank. Our old cross dressing friend Frank n Furter. He was there. I swear! He was watching us. Watching us from another plane.

Chip: Like a ghost? You’re saying we were being spied on by a transvestite Casper?

Rod: Now it’s your turn to mock me. If I were in your shoes, I’d probably do the same, but I know what I saw.

Chip doesn’t respond. They both rise.

Rod: I think I’m going to head for home. I need to start packing right away. That bus leaves tomorrow. And don’t look so glum. I may be back some day.

Chip: I know. If you don’t get on that bus, you’ll regret it. Maybe not today, maybe not tomorrow, but by next week I’m sure regret will have kicked in by then. Well, all I can say is good luck. I would hug you, but we aren’t really the hugging types.

Rod: You can go hug your kid.

Chip: Huh. He’s three years old and we’ve never even had a conversation about him before.

Rod: Yeah. Sometimes the two of us can be a little superficial aren’t we? Very well.. No hugs, but I could give you a hearty hand clasp.

Chip: That would be okay.

Rod: What’s that from again?

Chip: The Bank Dick. Or was it It’s a Gift? I know it was one of those W. C. Fields movies.

Rod: (Giving Chip a hearty hand clasp) You know Louie, this could be the start of a beautiful friendship.

Rod waves before starting to walk away

Chip: (As Rod begins to walking away) Here’s looking at you, kid!

As Rod goes out of view, Chip sits back down and pulls out the box of candy from his pocket and notices there are a couple of Raisinets that stuck to the bottom of the box, which he consumes.

Rod and Chip never went to a movie together again.

OR DO THEY? JOIN US NEXT FOR OUR FINAL INSTALLMENT TO FIND OUT!
Posted by 1001: A Film Odyssey is produced, directed and written by Chris, a librarian. at 3:05 PM