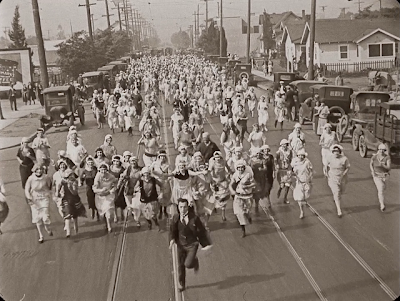 Robert Youngson isn't a name I've thought about for some time, but looking at some of the silent comedies from the 1001 movie book has made me think back to his theatrical compilations of the greats of comedy (mostly silent) in films like The Golden Age of Comedy, Days of Thrills and Laughter and Four Clowns.

I remember catching a few of Youngson's films on television during the 70's. And yes, there was a time when things like this were shown on television instead of How I Met Your Mother marathons  or endless showings of How to Lose a Guy in 10 Days!

Anyway, these films had most of the greats: Harold Lloyd, Laurel and Hardy, Charley Chase and Buster Keaton, among others. I believe I first saw the ending of Buster Keaton's classic Seven Chances in Four Clowns.

The plot of Seven Chances is simple. Buster's Uncle dies and his will bequeaths Buster seven million dollars if he marries by 7 o'clock on his twenty-seventh birthday. Of course, he finds out about this the day of his twenty-seventh birthday! The girl he loves won't marry him because she thinks she only wants to do it for the money. After this rejection, Buster tries unsuccessfully to find someone else to marry him. His business partner puts an ad in the paper which explains everything and Buster suddenly has hundreds of women wanting to marry him.

The plot is pretty silly when recounted and is mostly just an excuse for Keaton's sight gags and pratfalls. But the sight gags and pratfalls are, not just funny, but high art. The last half of Seven Chances where the brides to be chase Buster through the streets, through mountains and they all have to contend with falling boulders really defines why many still love silent comedy.

The comedic gags go so fast, I found myself going back and watching scenes again. I loved the scenes where the women ran roughshod over macho football players and construction workers.

But it's really about Buster. And it has been written often how he does it all with his body movement as his facial expression never conveys happiness. His stunts are amazing (I don't use the word amazing often, but I don't mind using it here) and still very funny.

If you've never seen a Keaton movie, this would be a great place to start.

Posted by 1001: A Film Odyssey is produced, directed and written by Chris, a librarian. at 5:58 PM