Favorite movie from the top 5: Back to the Future. I know I should pick one of the higherbrow movies like The Color Purple or Out of Africa here, but I got to go with Marty McFly and Back to the Future. It really is a movie that has stood the test of time (Pun intended) 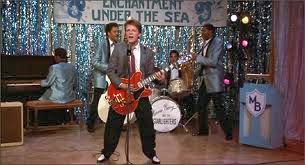 Back to the Future

Least favorite movie from the top 5: Rock IV. I mentioned in my previous post, that I had never seen a Karate Kid movie all the way through. I've also never seen a Rambo movie (I've seen Son of Rambow, but that doesn't count here). But since I have seen Rocky IV, this is an easy choice for the bottom of the top five box office of the year. The movie actually gets off to a strong start with the death of Apollo Creed, but as the movie wears on and Rocky fights the Russian and the crowd begins to start rooting for Rocky for seemingly no reason, all I could do was shake my head at it. As I left the theater, I  continued to shake my head.


Down the box office charts from that year is #53 Kiss of the Spider Woman. The plot is pretty simple. In a generic country of your choosing, there are two men sharing a cell. Valentin lives for the fight. Lives for justice. Lives for revolution.


The other one lives for the romance only. Molina can recount in detail a romantic Nazi propaganda movie without having any problem with the politics within it.

The two characters are so different from each other that they seem like different parts of one more fully developed person. I don't mean that negatively as I think the two are pretty fascinating most of the time. Towards the end, the feminine becomes more revolutionary and the revolutionary becomes more of a romantic. This may border on being cliche and predictable for some, but I think the story is strong enough to avoid it. The Oscar winning performance of William Hurt and the always good Raul Julia definitely are a plus, since most of the movie is just the two of them.