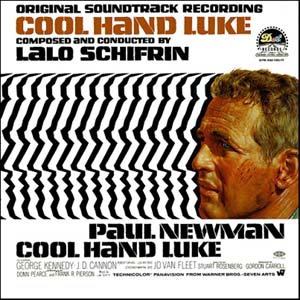 The true movie "rebel without a cause" during that hectic year of 1967 didn't resemble a hippie peacenik or a protest singer, but instead resembled Hollywood's top leading man of the era, Paul Newman. Newman plays Luke, a man sent to a prison camp where his anti-establishment ways slowly make him a hero with his fellow inmates.

Cool Hand Luke is set in the 50's, but the mentality is pure 60's "not taking it from the man" and uses the overused but appropriate symbol of Luke as a Christ figure.

I think the film dates pretty well, with many memorable scenes and one of the all-time great movie quotes when prison warden Strother Martin clubs Newman into a hole and states, "What we've got here is failure to communicate." 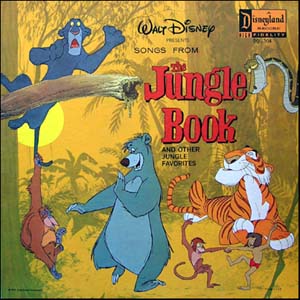 If you had asked me what the greatest movie of all-time in 1967, I would have said The Jungle Book. I was four at the time and I was just mesmerized by the jungle adventures of Mowgli and friends. I hadn't seen it in years all the way through before watching it again. I honestly can't be subjective when it comes to this one. I still love Baloo the Bear and all the fun in the jungle. And how can you beat the voice work of George Sanders, Sterling Holloway, Sebastian Cabot and Phil Harris? The movie soundtrack features songs by The Sherman Brothers with The Bear Necessities being the most famous of the bunch.

Note: I know there is a forthcoming live-action version of The Jungle Book. I have reservations, but admit to really liking the idea of Bill Murray as Baloo the bear. 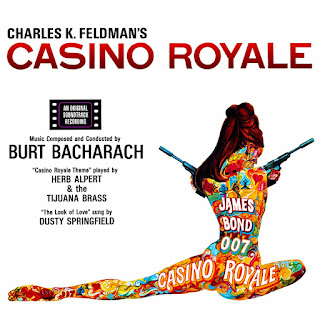 The best thing about this in name only James Bond adaptation is the opening song by Herb Albert and the Tijuana Brass. The opening credits are pretty cool too. And the cast is an interesting assortment from Woody Allen to Orson Welles to Ursula Andress. Other than that, it's a real misfire. 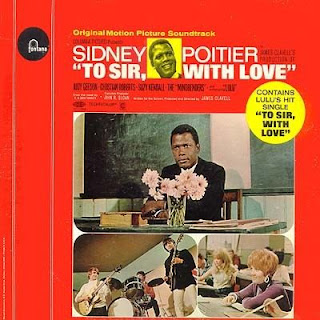 A sanitized, but still effective story of black teacher taming and inspiring a bunch of unruly British students. But the theme song by Lulu (who also plays a student) may be the thing one remembers most about this one.

3. Guide for the Married Man 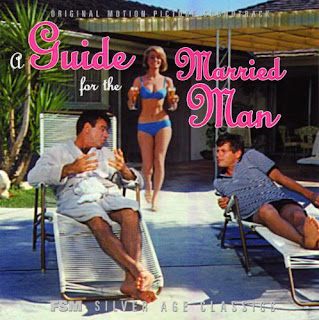 A personal favorite of mine. A Guide for the Married Man is the story of a married man (Walter Matthau) who is prodded into having an affair by his best friend (Robert Morse)...Despite the fact that Matthau is already married to the beautiful Inger Stevens. Morse gives Matthau pointers that are illustrated in skits by many stars of the day (and previous days), with an especially funny segment featuring Terry-Thomas. The catchy theme song is from The Turtles.

4. How to Succeed in Business Without Really Trying 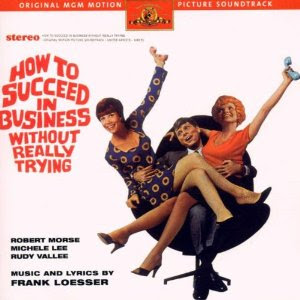 Speaking of Robert Morse: It's been an awfully long time since I've seen the movie adaptation of the long running Broadway musical, but I do remember liking it. I've never seen it on stage...though I just saw an interesting clip of a relatively recent revival with Daniel Radcliffe in the lead role. 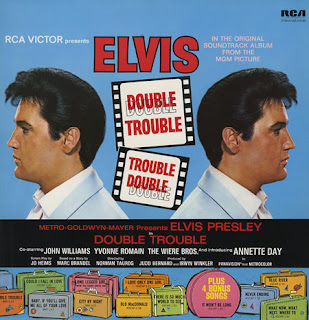 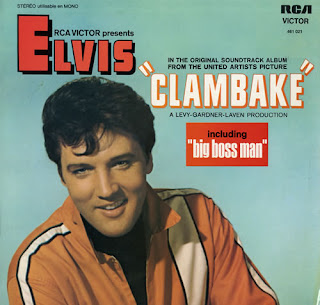 I think I've seen both of these Elvis Presley movies, though the memories of them appear to be running together over time. Clambake at least has Jerry Reed's Guitar Man on the soundtrack and Shelley Fabres as Elvis's love interest in the movie. The Double Trouble soundtrack has Elvis's uptempo version of Old MacDonald Had a Farm...Isn't that enough?

This may be up for debate, but I believe the American spy Flint films starring James Coburn were superior to the rather cheesy Dean Martin Matt Helm spy films. The Ambushers (The Matt Helm one) does have a fairly catchy theme song from 60's songwriting stalwarts Boyce and Hart and a score from soundtrack stalwart Hugo Montenegro. 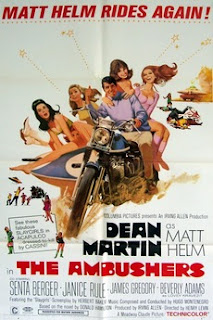 The In Like Flint soundtrack has the music of regular movie music composer Jerry Goldsmith and boasts a really groovy album cover. 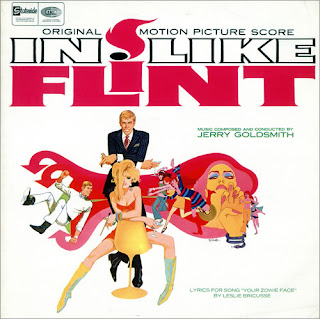 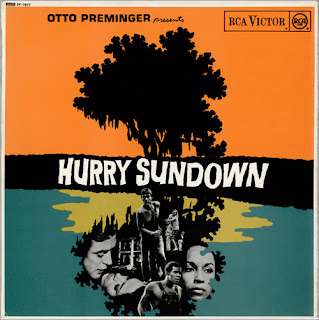 Montenegro also lent his talents to the Otto Preminger's universally panned Hurry Sundown. And the theme I found on YouTube didn't even have 100 views, but you know, it sounded quite majestic and grand to me! Probably more score than the movie deserved. 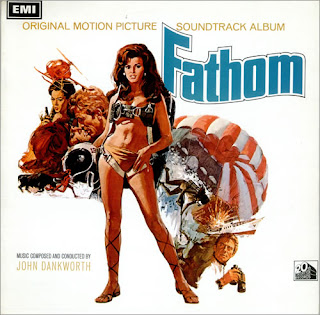 Obviously the main attraction of the movie Fathom is watching Raquel Welch model a series of 60's bikinis and other assorted sexy outfits. She's stunning, no doubt. I remember the movie itself as not being too bad either and a definite upgrade from Raquel's One Million Years B. C. The soundtrack features John Dankworth and the cover shockingly features Raquel in a bikini! 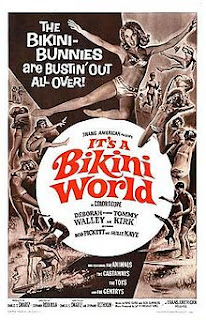 Speaking of bikinis, there were a few 60's beach movies that even Frankie Avalon and Annette Funicello wouldn't appear in. The second string romantic beach duo in It's a Bikini World was Tommy Kirk of Old Yeller and Deborah Walley. There are interesting musical performers in the film, including The Gentrys, The Toys and The Animals performing their classic, We Gotta Get out of This Place!

9. The Ballad of Josie 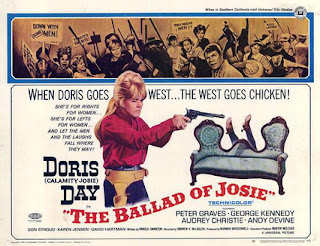 When there were rumors of Doris Day appearing in the new Clint Eastwood movie, I thought "Hey, It's Josey Wales meets the Ballad of Josie!" Except hardly anyone remembers this later period Doris Day Western where the opening theme song pronounces The Ballad of Josie...A story to Remember...A pretty Girl...A sturdy girl...Made of solid tiiimmburrr. I will say the theme song is really the only thing I remember about this one. Movie gets some free points because I watched it with my mother as a kid. 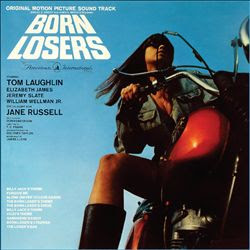 When the re-release of Billy Jack made B. J. a household name in the early 70's, Billy Jack's earlier movie The Born Losers, was also re-released at the same time. I saw them both, of course as it was a Billy Jack kind of time, ya know! The Born Losers soundtrack is a pretty rare collectible apparently,  and has a pretty cool cover of a girl on a motorcycle and the music within features a nice opening number from Mike Curb. 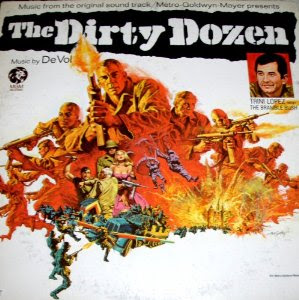 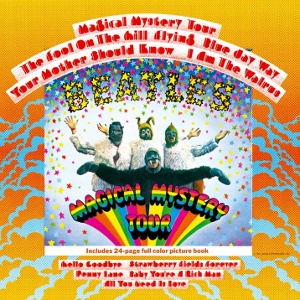 The Beatles ill-fated 1967 road trip is definitely a case of get the music and forget the film...unless you are a Beatle completest.  I Am the Walrus, Penny Lane, Strawberry Field Forever, All You Need is Love, among others. 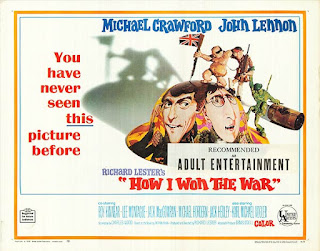 I remember it was hard to watch this off-beat war movie because I saw it so soon after John Lennon's death in 1980. I do think John is the best thing in the film. There is an odd single from the movie that is credited to Musketeer Gripweed (Lennon's character) but doesn't appear to feature any input from Lennon whatsoever. 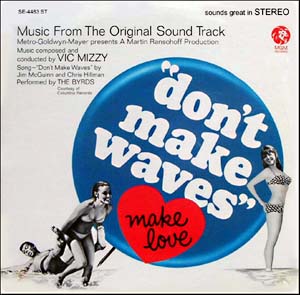 Other than the bikini-clad Claudia Cardinale and Sharon Tate, the most memorable thing about this beach comedy is the title song by The Byrds and accompanying music by Vic Mizzy. 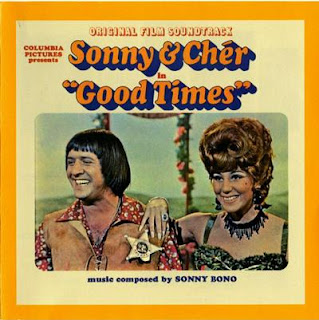 Early Sonny and Cher soundtrack features a less commercial version of I Got You Babe. Interesting that future Exorcist and French Connection director William Friedkin was the director here, but I guess if you begin your career directing Cher, everything afterwards seems that much easier. And where's Sonny's mustache? 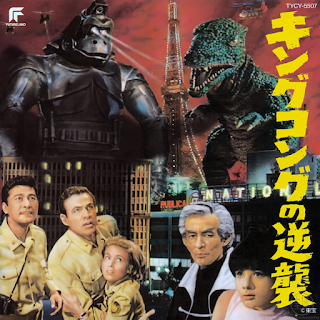 Other than The Jungle Book and Doctor Doolittle, this is the only movie on this list that I actually saw during the year of release! I'm sure I would have given it a thumbs up if I had rated it at the time. The soundtrack does feature the majestic score from Japanese composing legend Akira Ifukube. 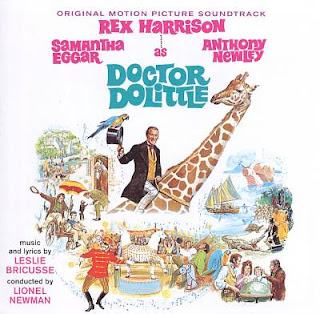 I'd have probably rated this only second to The Jungle Book as the greatest movie of all-time if you had asked me in 1967. I realize the movie has lots of problems and my sentimental attachment to it is perhaps misguided. But the two headed-llama and that giant snail will always be cool to me. Talk to the Animals won best song at the Academy Awards that year. And the film itself got a much ridiculed Best Picture nomination. 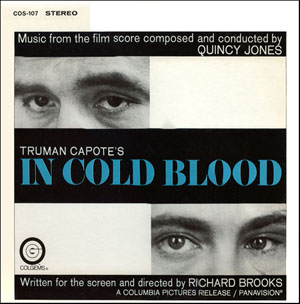 Yes, the gripping film adaptation of Truman Capote's In Cold Blood should have gotten Doctor Dolittle's Best Picture nomination, but it was what it was. Quincy Jones jazzy musical score did get a well deserved nomination.

19. Guess Who's Coming To Dinner 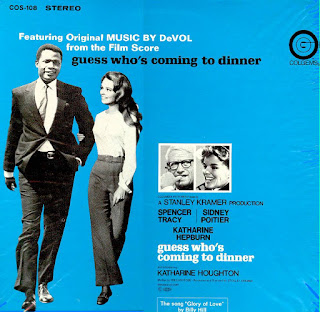 Stanley Kramer's Guess Who's Coming To Dinner, the story of a (gasp!) interracial engagement seems to have just as many detractors as it has fans. But sometimes you have to give a little, take a little and let your poor heart break a little. That's the story of..that's the glory of love! 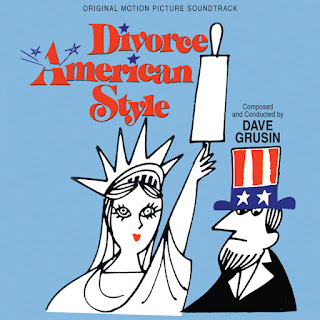 It's been a long time since I watched this comedy with Dick Van Dyke and Debby Reynolds. I do remember liking it at the time and really wish to watch it again after reading about the making of the movie in writer Norman Lear's memoir, Even This I Get to Experience. The music in the soundtrack is provided by Dave Grusin. Divorce, American Style was Grusin's first of many movie scores. Since then, he has been nominated for an Academy Award eight times, winning in 1989 for The Milagro Beanfield War. 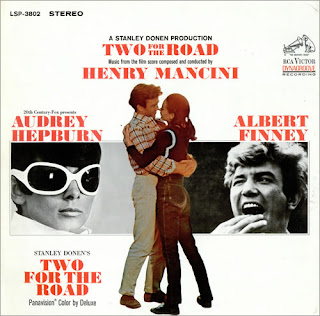 This was a movie on the long list of movies I've wanted to see and have just never gotten around to it until now. It features Audrey Hepburn and Albert Finney as Joanna and Mark, a married couple traveling around Europe seemingly in the death throes of their marriage. Two for the Road then jumps around to earlier stages of Joanna and Mark's marriage and their initial courtship. The back and forth storytelling style is a little jarring at first, but when you get used to the narrative structure, you have to admit the film definitely belongs in the higher tier of romantic movies.This is helped by the fact that Hepburn and Finney have to be one of the all-time engaging movie screen couples.

The main composer of Two For the Road is Henry Mancini, who had seven Oscar nominations (and three wins) during the 60's, but interestingly not one for Two for the Road. 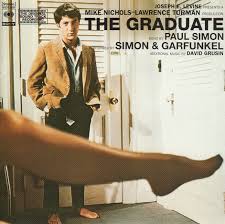 Posted by 1001: A Film Odyssey is produced, directed and written by Chris, a librarian. at 5:59 AM