THE BRIDGE ON THE RIVER KWAI (1957, GREAT BRITAIN) 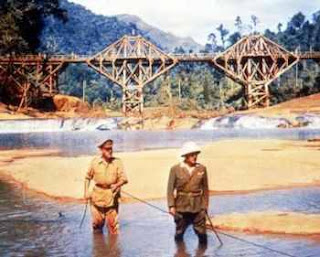 The Bridge on the River Kwai has got to be ranked as one of the greatest films ever made! At least that’s my initial reaction after seeing it for the first time last night. The question is why did I put off seeing it for over forty years?

I could try to list reasons why you should see it, but I really don’t want others to make the same mistake that I made and procrastinate for years and say “I just don’t feel like watching a three-hour 1950’s war film.

I hope you will now enjoy this film as much as I did.
Posted by 1001: A Film Odyssey is produced, directed and written by Chris, a librarian. at 3:49 PM