Film buffs everywhere always have one film they’ve been waiting an eternity to see. For some films, it seems like no matter how hard you sleuth and search, there are no screenings, no DVDs, Blu-Rays, or even VHS tapes available. Perhaps the location of any existing prints of the film isn’t even known, and it’s simply lost to the ages.

For the British Film Institute, on the top of that list was George Pearson’s 1923 silent film Life, Love and Laughter, which, until recently, was believed to have been lost or destroyed. The only reason the BFI even knew the film existed was thanks to six production stills, a campaign booklet, and a publicity leaflet which were distributed to promote the film.

As luck would have it, the Dutch film institute EYE received a shipment of old film tins in November 2012 from a small cinema in rural Holland, which had only been open from 1929 to 1931. Earlier this year, workers at EYE finally began to sift through this shipment and stumbled upon a copy of Life, Love and Laughter. A call to the BFI confirmed that they had found the second of only two Pearson films known to still exist.

The film is noteworthy in many ways, making the find all that better. For one, it’s a full length film, something almost unheard of in the silent film era. The period during which it was created saw more silent filmmakers expanding their format into full length films, and this happened to be one of them. It’s also the film which is largely credited with launching the career of its star, Betty Balfour. Balfour was England’s answer to Mary Pickford in the 20s, who collaborated with Pearson on many films which earned her the nickname “Queen of Happiness” for the perpetual optimism she injected into her characters.

In this particular film Balfour plays Tip Toes, a down on her luck chorus girl who dreams of one day stepping into the spotlight on the main stage. She meets a young man (played by Harry Jonas) who has similarly large ambitions, except his consist of being a famous writer. The two plan to meet up two years later in order to see if either had been able to make it bit. The film served mainly as a unbeat story to comfort a nation shaken by World War I.

The film was both a critical and commercial hit, which is exactly why it was still being screened in the Netherlands six years later. The Daily Telegraph said the film was "destined in all probability to take its place among the screen classics" and the Manchester Guardian called it “spectacular at times, lit and photographed with a beauty to dream of” –a compliment which came courtesy of cinematographer Percy Strong.

While the film currently remains in the Netherlands, the BFI is hoping to obtain a copy so they can translate the Dutch title cards into English and host screenings of the notorious film. Next on BFI’s list of “Most Wanted” is another film by Pearson starring Balfour called Réveille, a film about British life during World War I.

About the Author: Spencer Blohm is a freelance entertainment, film, and pop culture blogger for DirectTelevisionSpecials.org
While he can’t claim to be the biggest silent film buff, he’s willing to make an exception for this missing piece of film history. He lives and works in Chicago, where he’s been known to catch a talkie or two from time to time.

Posted by 1001: A Film Odyssey is produced, directed and written by Chris, a librarian. at 5:37 PM No comments:


Since I'm taking a break from the 1001 blog this month, my friend Droppo3000, the writer of the new Atlanta Braves baseball blog http://atlantabraves19701980.blogspot.com/ and one of the biggest baseball fans I know has asked if he could look at some baseball movies for me. Very nice of him to give me a break. And without further ado, here's Droppo!

Thanks, Chris. I certainly love baseball movies, especially old school baseball movies. I was going to look at my all-time favorite, The Bad News Bears, but my old stick in the mud friend says that I need to stick with the ones from some list he's doing. Well, that's all right, I see three listed that I'll be happy to re-watch.

The first one is The Natural. I'm not going to lie to you. The first time I saw this movie at the theater I was really..."under the influence of an illegal substance that is ingested orally but seems to have gained a certain recent acceptance in the state of Colorado." That was all right though. The Natural had a certain dream-like feel to it that seemed appropriate to the state of mind I was in at the time. It will be interesting to see it now.

I still can't shake that dreamlike feel I get even after viewing today. That feeling is part of baseball's mystique. This movie could never be about football. It has to be about dreams, redemption and second chances. The music thundering, the ball slamming off the Wonderboy Bat-smashing lights, clocks or nearly decapitating a sportswriter. What exactly happened to Roy Hobbs before he made his comeback? Eh, you fill in the blanks, it isn't what matters here. Accept the mythology, accept the movie.

The next one on the list is Bull Durham. The church of baseball-It says it in that narration right off the bat. This movie also relies on its own baseball mythology. But it's not a poetic dream (even if you are being read Walt Whitman while you're tied up). It's superstition, it's disappointment, it's low wages, it's hard working class hard knocks and it's everyone living their dream. It's the minor leagues done right by Ron Shelton, someone who lived and breathed minor league baseball during his playing days and shows it for all of baseball's fun and hardships (mostly fun for the audience). Kevin Costner and Tim Robbins play the veteran catcher/goofball-hotshot- young pitcher combo very well. And who wouldn't want to be in the minors if you get chosen for the season by minor league baseball tart, Susan Sarandon?

The last one on the list is Field of Dreams. This is closer and probably even goes further than  the mythological baseball dreamworld of The Natural. Sappy, romanticized and illogical...and I love it! I wonder how they figured this one would ever work on the screen? "I mean it's man moves to Iowa with his family and voices tell him to build a baseball field over his crop with the help of a guy who is like the guy that wrote Catcher in the Rye and the ghost of Burt Lancaster." Wow! What an odd synopsis. Only it works. And I won't lie to you, I got more than a little misty when Kevin Costner starts to play catch with his dad!


And for good measure, here's a list of 10 other baseball movies I have an attachment to.

1. The Pride of the Yankees-Certainly a baseball classic with Gary Cooper as the ill-fated baseball legend Lou Gehrig. But the scene where Babe Ruth promises the kid he'd hit a homer and Lou Gehrig trumps him by promising the kid he'd hit two always bothered me. At least, Babe got to play himself. 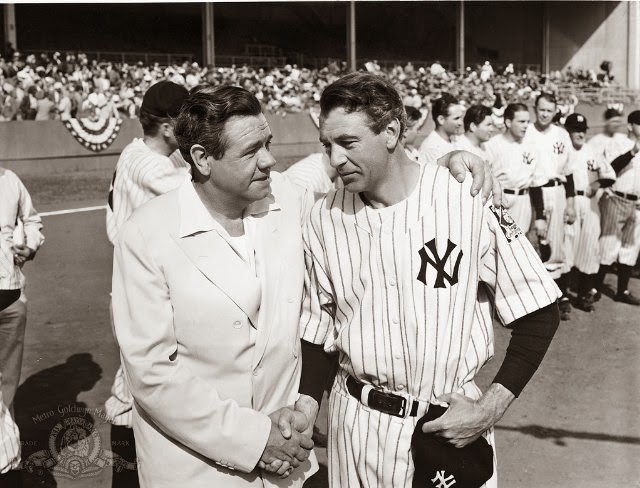 2. The Babe Ruth Story-Not that well received of a film, and William Bendix playing the teenaged Babe Ruth was pretty ridiculous, but I admit that I still like this sanitized biographical story of the Bambino. So sue me. 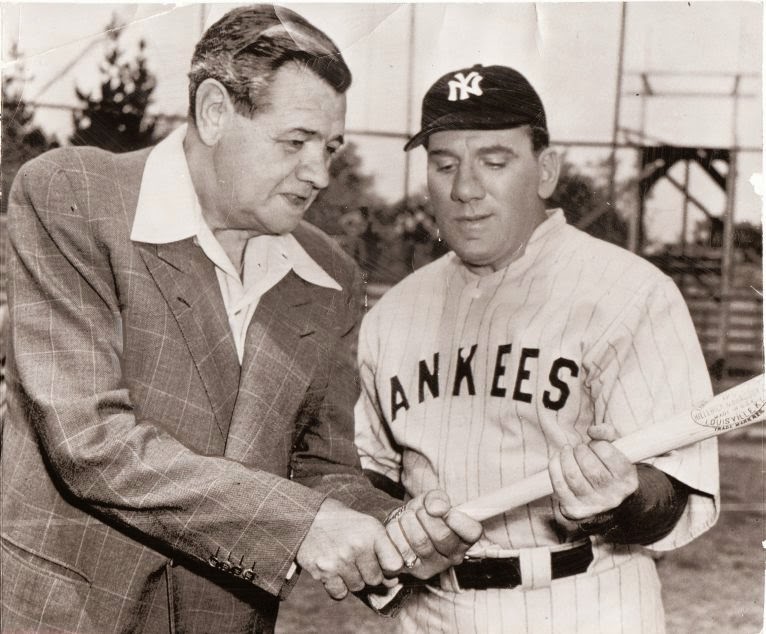 3. It Happens Every Spring-Ray Milland plays a scientist who invents a fluid that repels wood. So it's natural that if you dip a baseball with it, they can't hit it. I seem to remember a lot of scenes where a batter would swing at a pitch and the ball would jump over his bat and he would stare back in bug-eyed disbelief. I also remember that Alan "the Skipper" Hale Jr. had a small role as a catcher. 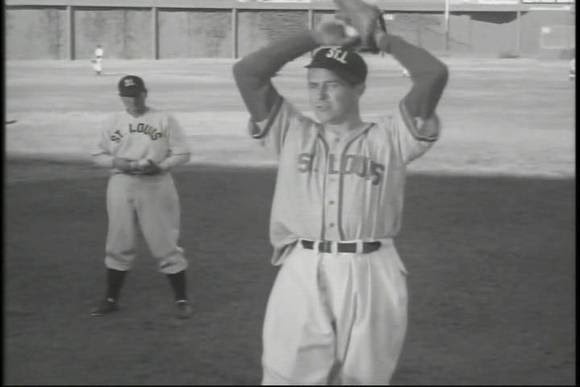 4. Rhubarb-Ray Milland (his generation's version of Kevin Costner, it would seem) in a story about a cat named Rhubarb who owns a baseball team. Or maybe he inherited a baseball team. I remember the movie had a dramatic rain delay scene. Or something like that. Look, I haven't seen the thing in forty years, I can't remember the details. Did I mention that Ray Milland was the 40's version of Kevin Costner? 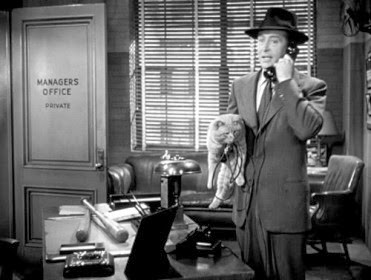 5. The Pride of St. Louis-Legendary pitcher Grover Cleveland Alexander overcomes his drinking problem to get out the Yankees in the 1926 World Series...No, wait. That's Ronald Reagan in The Winning Team. The Pride of St. Louis has Dan Dailey playing the great ole St. Louie pitcher Dizzy Dean, who becomes a broadcaster after his playing career is over and keeps saying "ain't" and "slud into third" during broadcasts and his improper use of English makes the local teachers want him off the air so the kids won't say things like "ain't" or "slud into third!" The teachers do change their minds, and Ole Diz eventually gets his own charcoal brand. 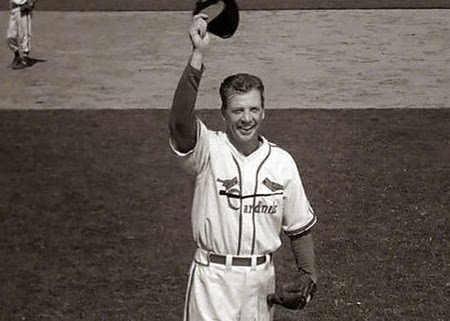 6. Fear Strikes Out-Anthony Perkins plays mentally unstable ballplayer Jim Peirsall. The most famous scene is Perkins climbing the backstop. The fact that Perkins throws like a girl is a bit troubling. 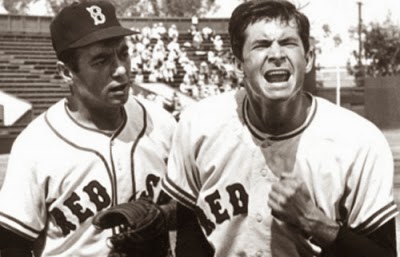 7. Damn Yankees-The movie version of the Broadway musical featuring Ray Walston as the Devil. I have seen this on stage with Dick Van Dyke as the devil. The team Joe Hardy plays for in the movie and I'm guessing during the original Broadway run was The Washington Senators. Since there were no Washington Senators after 1971, some stage versions feel the need to switch the thing to the Cleveland Indians. But I'm old school, so I'd certainly want to keep any production I see as the Washington Senators. 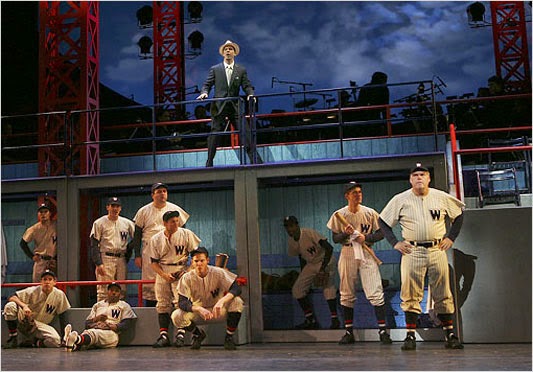 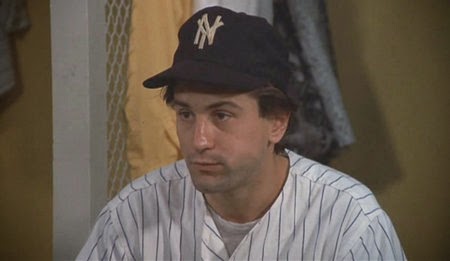 9. The Bingo Long Traveling All-Stars and Motor Kings-Enjoyable comedic look at a barnstorming black baseball team from the 40's. The film stars Richard Pryor, Billy Dee Williams and most importantly James Earl Jones, because when he later says "People will come, Ray" in Field of Dreams, Bingo Long has long before established his baseball chops. 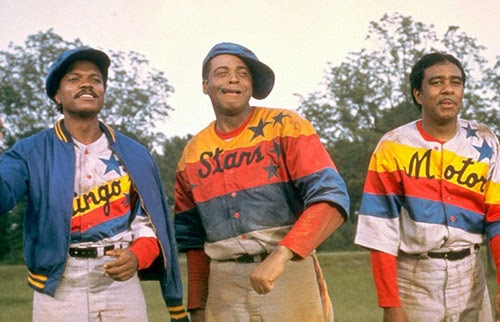 10.The Bad News Bears-Got to mention my favorite baseball movie of all and it's not just because I had a teenage crush on Tatum O'Neal. A team of underachiever kid ball players making a great comeback in their season really hadn't been done before. It's been done about 1,000 times since. 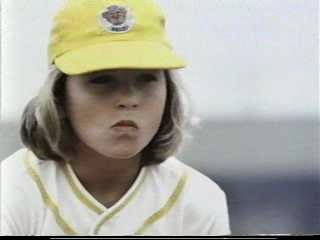 That's all I got, Chris. Thanks for letting me have my say.

Posted by 1001: A Film Odyssey is produced, directed and written by Chris, a librarian. at 5:00 AM 2 comments: