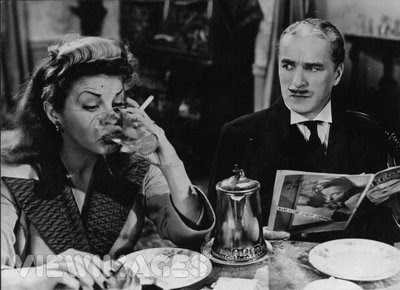 I ventured down to the Chickasaw library yesterday, which is about a one-minute walk from where I live.

I wanted to look through their VHS collection to see if there was anything on my 1001 movie list that I could rent there that I hadn’t seen before. Low and behold, I came across Charlie Chaplin’s Monsieur Verdoux.

I’ve seen most of Chaplin’s most famous feature films: The Gold Rush, Modern Times, The Great Dictator, City Lights and Limelight. I’ve also seen many of his classic shorts including 1916’s The Pawnshop, which I purchased from good ole Blackhawk Films on Super 8 during the 70’s. (Note: I did not see The Pawnshop in 1916, but my reference to purchasing Super 8 films is making feel a little old, nonetheless.)

I also broke out my old copy of Charlie Chaplin’s book My Life in Pictures (1975) which gives a brief but telling view of Chaplin’s films and life through the words of Chaplin himself.

Chaplin on Monnsieur Verdoux: The film was disliked in America where its message of anti-materialism was mistaken for immoral cynicism.

Me on Monsieur Verdoux: It’s interesting to see Chaplin in a guise other that of the little tramp. He plays a modern day Bluebeard who marries or takes advantage of middle-aged women for their money and disposes of them afterwards. It is pretty funny despite the dark subject matter, especially some of the scenes with Chaplin and Martha Raye (a later generation came to know as: Martha Raye: denture wearer, but she was a talented comedienne in back in the day).
All these later Chaplin films tended to end with a bit of moralizing. This one might be best summed up with Verdoux calling himself an amateur murderer compared to the systematic murders of states about to go into a bloody world war. Kill a few they give you the guillotine, kill a lot they make you a king.
It wouldn’t be my first film recommendation for those uninitiated with Chaplin, but I think it is deserving of its place in the 1001 movie book.

While I was at the library, I also checked out the VHS of Chaplin’s last starring role, the 1956 film, A King in New York. (Not an entry in the 1001 movie book).

Chaplin on A King in New York: There are funny gags in it…yet even these seem too elaborate to me now, I feel a little uneasy about the whole film.

Now if you’ll excuse me, I’ve got tapes to rewind or else the Chickasaw library is going to charge me an extra buck per movie!
Posted by 1001: A Film Odyssey is produced, directed and written by Chris, a librarian. at 9:42 AM