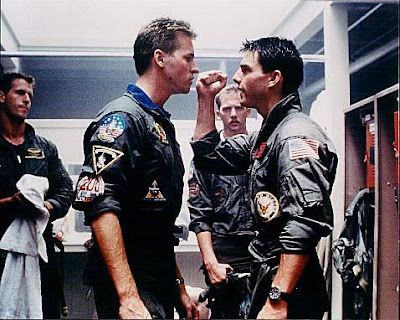 Movie Guy Steve says: Top Gun is the most homoerotic film I have seen since I watched Satyricon last year…The most homoerotic moment of the film happens when Maverick, Goose, Iceman and Slider are playing beach volleyball shirtless while Kenny Loggins sings “Playing with the Boys.”

And Nick and Nora continue with some dialogue examples:

I want some butt!

Whose wazoo do I have to kiss to get in this place!

Your tail is clear!.

Maverick has the ball…or so I’ve heard.

My Johnson is long and distinguished, how about yours?

I can already hold my own, but can you?

Even the name Top Gun. I mean, come on! Do I have to draw you a diagram to this movie’s hidden intent!

Take a hackneyed plot, combine it with ineptly written dialogue, clichéd and obvious direction, either over-the-top (Meg Ryan) or uninspired (Val Kilmer) performances and action sequences that might be playable if not for their complete and total incomprehensibility, mix them all together and you get: Top Gun!

Enough with the critics. As I said, I’m just going to sit back now and enjoy the show. May the naysayers get a snootfull of jet exhaust fumes!
I’ll report back immediately after seeing Top Gun for the first time in over twenty years:

I say after my first viewing of Top Gun in over twenty years: At this moment I feel like Jessica Lange in The Music Box where she has just defended her father against allegations of Nazi war crimes only to find out he turns out to be…guilty. That’s all I wish to say on the subject.

For my penance, I’ll give Movie Guy Steve the final word.

AMEN
Posted by 1001: A Film Odyssey is produced, directed and written by Chris, a librarian. at 8:04 AM