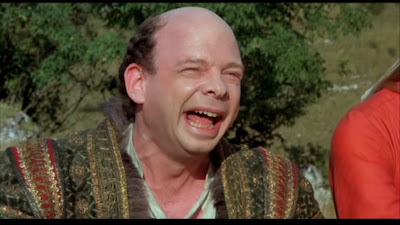 To paraphrase Peter Falk, "if there’s lots of fencing, fighting, torture, revenge, giants, monsters, chases, escapes, true love, miracles" and I'll throw in that anything is OK if it has Wallace Shawn (pictured above) in it.

My new favorite line from The Princess Bride is Wallace saying to Andre the Giant, “Do you want me to send you back to where your were? Unemployed…in GREENLAND!" (It doesn’t print funny, it’s all in how he says it.)
Posted by 1001: A Film Odyssey is produced, directed and written by Chris, a librarian. at 2:33 PM