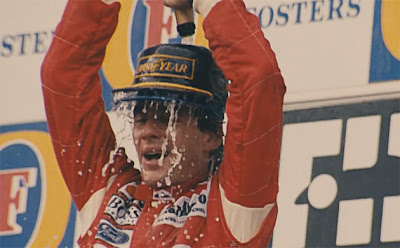 In Garth Stein’s clever novel, the Art of Racing in the Rain, the canine narrator shares the love that his owner has with Formula One racing. He is especially enamored by the ability of these drivers to be able to race effectively during inclement weather. And the best of these racers during the 80’s and 90’s was formula one superstar Ayrton Senna.

This led me to view the first film on the updated 1001 list, the British documentary about the above mentioned formula one racer, simply titled Senna. I’ve never particularly been a fan of Formula One racing (unless you count that I always thought Jackie Stewart had a cool accent when he used to be on The Wide World of Sports). However, once the story of Senna is put together in this documentary through interviews, archival and racing footage and news reports, the story of the man and the legend really takes shape. One sign of a good documentary for me is something that involves you about something you wouldn’t normally be interested in. And Senna does that.