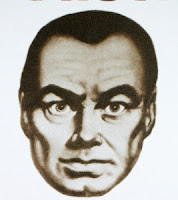 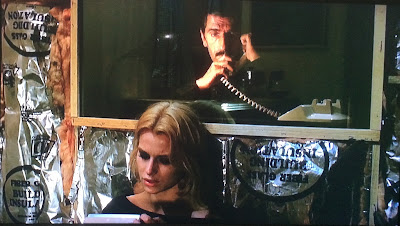 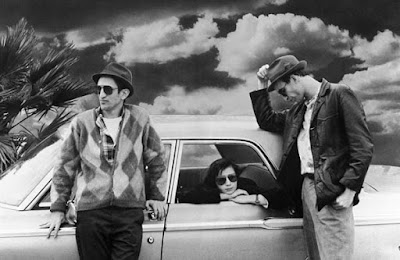 1984 in film had it's share of blockbusters (Beverly Hills Cop, Ghostbusters, The Terminator), big sequels (Star Trek III, Indiana Jones and the Temple of Doom), popular kid stuff (Gremlins, The Karate Kid, Footloose) and silly comedies (Police Academy, Revenge of the Nerds). In retrospect, the year also gave us some good small, independent films, two of which are listed above.

Wim Wenders's Paris, Texas is the story of a middle-aged drifter named Travis who is reunited with his brother and son after Travis's whereabouts have been unknown for a number of years. Much of the plot involves the unraveling of what has happened to him, and what he wants and needs. The search for his missing wife is a big part of the equation, too. I  love the scenes with estranged couple Harry Dean Stanton and  Natassja Kinski communicating through glass at a strip club. I saw this movie years ago and quickly got caught up in the storyline once again.

I like Jim Jarmusch's Stranger Than Paradise a lot. The story has three main characters: two buddies and their Hungarian born female friend. (Jarmusch later used a trio of main characters in Down by Law). The trio go from New York in the first scene to Cleveland in the middle act and wind up in Florida for the finale. There is a plot involving gambling theft, which does set their travels in motion, but it is the character study that is so biting here. We see shades of human frailty, avarice, and even a bit of growth for our trio at times. I liked the ending as well, though I can see where the unresolved nature of it all may leave some frustrated.


There were some films that did not make the 1001 movie cut from 1984 that I have seen. Here are a few. I'll also try to determine if I should ever revisit any of these films again.

1. 1984-One of the best and certainly best know of all Dystopian novels has been brought to the screen before the year in question. Some may prefer the 1950's television version with Peter Cushing as Winston Smith or the 1956 theatrical version with Edmond O'Brien. The 1984 version of 1984 successfully re-creates the paranoia and otherworldliness of the book. However, viewing will be no substitute for not reading the original novel in this case. There will be a test later!
Should I revisit? 2017 makes 1984 required viewing. 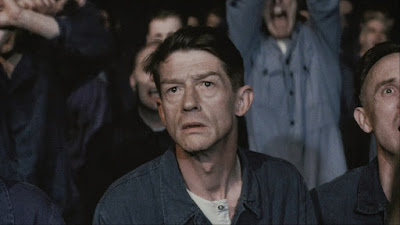 John Hurt as Winston Smith in 1984
2. 2010-The movie from 1984 named after a different year had the thankless job of being a sequel to Kubrick's unsurpassed classic 2001: A Space Odyssey. However, when viewed on its on terms, this Peter Hyams/Arthur C. Clarke collaboration is a fine film in its own right.
Revisit? Not sure, but I am hoping to read all the books in this Arthur C. Clarke series...2061, 3001 and maybe another year I missed.

3. All of Me-Lily Tomlin possesses Steve Martin's body and the comedy skills of these actors is what makes this an amusing film. It has a while since I've seen this one...opinions may change.
Revisit? Not unless I have a Steve Martin marathon where I have to see everything he made. (Not ruling that out!)

5. Blood Simple-Good reviews got me to got to the theater to view this low-budget film noir from these new filmmakers called the Coen Brothers. I've seen all their films ever since.
Revisit? New Criterion release equals another viewing in the near future.

6. Blame it on Rio-Sex comedy featuring a young Demi Moore and an aging lothario played by Michael Caine. It think they played daughter and father and Caine was dating a friend of hers...or something like that.
Revisit? This was a one shot only.

7. Broadway Danny Rose-Woody Allen's period of quality films from the 80's continued with this black and white comedy about a talent agent who gets involved with nefarious criminals and second rate acts.
Revisit? I think it's worth another go...if it isn't, Woody's films are real short in any case.

8. The Cotton Club-Francis Ford Coppola's gangster film is often compared to his earlier The Godfather in and usually ends with the conclusion that it isn't nearly as good as The Godfather. It's not without appealing moments, especially from the dance scenes featuring Gregory Hines.
Revisit? I think I'd probably spend that time re-watching The Godfather instead...or Animal House.
9. Body Double-Criticized for being misogynistic and yet another Hitchcock rip-off from director Brian DePlama, I still like this film enough after all these years enough to own a copy.
Revisit?  It's on my shelf...I probably will 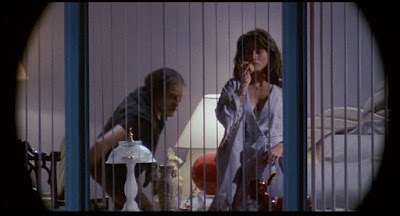 Deborah Shelton has an unwelcome visitor
in Body Double

10. Dreamscape-If you die in your dreams, will you die in real life? A good thriller, but may pale a bit in comparison right after you've seen Inception.
Revisit? I did watch it again a couple of years ago...that will have to do for this life.

11. Footloose-No dancing in this town! I remember when this came out, there was a criticism that it was just trying to piggyback off the success of the earlier dance movie Flashdance. But what do you know that Footloose has had more ultimate staying power than the earlier film!
Revisit?  I think its more likely I might see a stage version.

12. The Brother From Another Planet-Strange little sci-fi from director John Sayles about an escaped slave from another planet that I liked when it was first released.
Revisit? After reading the description of it and being reminded what this is about, this one would definitely be worth another look.

13. Give My Regards to Broadstreet-I'm a big Beatles fan and usually will try anything Beatles related, but I don't know what Paul McCartney was thinking with this one which was about...I'm...just...not...really...sure. At least it has some good songs.
Revisit? Despite the fact that I saw a website that said Give My Regards to Broadstreet was a lot better than you may remember, I don't see it happening. 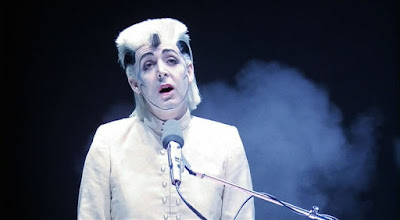 Paul McCartney dressed as...I'm guessing a skunk of some kind?
in Give My Regards to Broad Street

14. Indiana Jones and the Temple of Doom-Often labeled as the weakest Indiana Jones film, I think after a recent viewing that that assessment may be unfair. I found it a pretty good adventure film. It doesn't have Karen Allen, which is a problem.
Revisit? I already revisited once a couple of years ago...that may have to suffice, Shorty!
15. Irreconcilable Differences-Drew Barrymore divorces her parents Shelley Long and Ryan O'Neal.
Revisit? No. Just no.

16. Johnny Dangerously-I like Joe Piscopo more than some do, but I can't remember too much to recommend this gangster comedy other than there is a song by Weird Al Yankovic.
Revisit? I saw this movie once...ONCE!

17. Choose Me-This low budget drama I remember really liking...any movie with Genevieve Bujold as a late night DJ has that going for it right off the bat.
Revisit?  Definitely 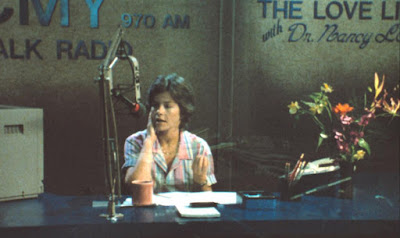 
18. The Lonely Guy-It's tough to be lonely...not the best of the Steve Martin comedies, though I tend to like most everything Steve Martin is in.
Revisit? See comment under All of Me

19. Moscow on the Hudson-One of the early examples of Robin Williams showing off his dramatic chops in a Paul Mazursky dramedy about a Russian defector.living stateside.
Revisit? Yeah, I think so.

20. The NeverEnding Story-Creative, fantastical adventure and the favorite movie of at least two people I know.
Revisit? We recently did a book group on the Michael Ende book. I was planning to watch it again...but ended up only watching the music video of the opening song by Limahl! 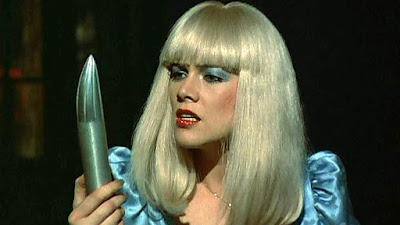 Kathleen Turner examines the merchandise in Crimes of Passion
22. Night of the Comet-Cute teenage end of the world movie that I remember watching a few years ago with my son and niece.
Revisit? Only if Kara and Collin come into town and want to watch it.

23. Police Academy-Speaking of never ending stories...I guess this long running film series actually did have a beginning.
Revisit? Only if Bill Clinton comes into town and wants to watch it.

24. Protocol-One of those cute 80's comedies about Goldie Hawn going to Washington and...and...what was this about again?
Revisit? I'm not interested enough to look up in Wikipedia the synopsis of Protocol, let alone watch it again.

25. Master Ninja-Really a failed Lee Van Cleef pilot and subsequent episode smushed together seemingly for the sole purpose of being lampooned later on Mystery Science Theater.
Revisit? MST episodes are always a possibly for a rewatch. 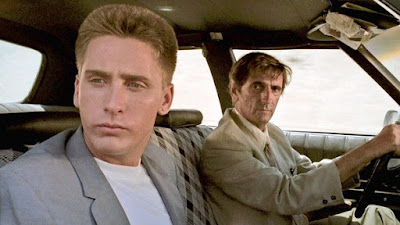 30. Romancing the Stone-First of a couple of fun adventure movies with Michael Douglas and Kathleen Turner.
Revisit? Probably not...though watching Kathleen Turner during this period isn't an idea without a certain appeal.
31. Sixteen Candles-An important movie to the generation that graduated high school four years after me.
Revisit? Only if my wife asks me to. She did make me watch Real Genius and Pretty in Pink, so there is some precedent here.

32. Splash-Ron Howard film about a mermaid that really helped make Tom Hanks a star was a big hit...but I just remember thinking it was only so so.
Revisit? I might like it better if I saw it again. I'll think about it.

33. Star Trek III: The Search for Spock-Clever entry in the Star Trek film series that found a way to bring back Spock.
Revisit? I'd have to see Wrath of Khan first.

I have been and ever shall be your friend...Star Trek III

34. Supergirl-Superhero movie that I only watched because it was on a VHS tape that was handy. I think this was only made in the first place because Christopher Reeve wasn't around.
Revisit? Not likely
35. Teachers-Not a bad dramedy about inner city teachers with Nick Nolte.
Revisit? I liked it, but don't particularly desire to go to school again.
36. Thief of Hearts-This was a chick flick about a guy who stole hearts and redecorated kitchens and I also remember it had George Wendt in it.
Revisit? I cannot imagine a scenario where I would watch Thief of Hearts again.
37. Stop Making Sense-Concert film of The Talking Heads that was one of the first things I checked out from the video store when I got my new VCR. It was about the only thing my friend Mark wanted to rent for awhile!
Revisit? Only if Mark comes into town and want to watch it. 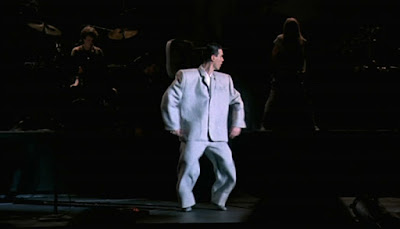 David Byrne of The Talking Heads dances while wearing
an oversized suit in Stop Making Sense
38. Tightrope-Clint Eastwood cop movie that was a little less over the top than Dirty Harry from what I remember.
Revisit-I wouldn't rule it out if I get on Clint kick...which is more likely after reading American Rebel: The Life of Clint Eastwood by Marc Eliot.

39. Unfaithfully Yours-Those halcyon days of lighthearted Dudley Moore comedy vehicles were probably fairly amusing but left no lasting impression.
Revisit-Revisit what?
40. Purple Rain-It took me thirty years to finally see this famous Prince semi-autobiographical film. The songs like When Doves Cry and the title song have been part of popular culture since release. The movie itself is about Prince's rough relationship with his family, his struggles with getting his music onstage and his relationship with an attractive hanger named Apollonia (Strangely enough played by an actress named Apollonia!) Not a classic by any means, but an undeniably impressive showcase for the talent of the star at his peak.
Revisit-It took me thirty years to watch, but I'll watch again. (If my wife asks me, of course) 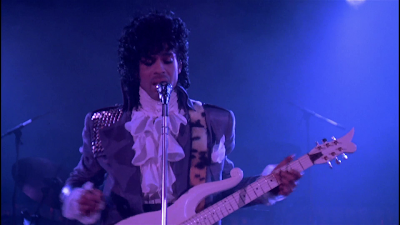 Prince as the Kid in Purple Rain