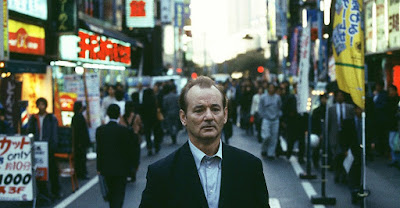 Bill Murray is Lost in Translation

I've been a fan of Bill Murray dating back to his tenure on Saturday Night Live in the Late 70's. His movie career has been varied to say the least. Over the years, he has been in starring comedic roles, idiosyncratic indie films, dramas, movies with ensemble casts, cult films and movies that defy categorization, such as Space Jam and Osmosis Jones.

His best critical notices may have come for Lost in Translation, Sophia Coppola's story of an aging movie star (Murray) who gets involved with a younger woman (Scarlett Johansson) during a business venture in Japan. The relationship between the two is atypical and always interesting to watch unfold and can't imagine the film succeeding without Murray. He manages to be a bit self-pitying, but somehow never makes himself unsympathetic. A lot of people thought he should have won the Oscar that year, but it wasn't to be. I would have liked to have heard that acceptance speech.

A different type of Murray role from this year was his one scene in Jim Jarmusch's Coffee and Cigarettes. This film is a series of vignettes involving people sitting around smoking, caffeinating themselves and talking. The success of the film relies on how interesting the talking parts are. I'm a Jarmusch fan, but I didn't find this nearly as successful as Night on Earth, for example. It's largely hit or miss. The Murray section is one of the hits. Murray's section features two rap artists from the Wu Tan Clan at a cafe talking about the evils of caffeine and nicotine when their waiter comes up and it is none other than Bill Murray playing himself! Their interaction here is brief, amusing and probably the highlight of the film. Why is Bill Murray a waiter at this restaurant, again? I can'' even  remember, it's just fun that he was. 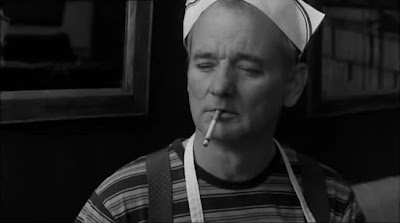 Bill Murray dishes it up in Coffee and Cigarettes

The Big Bad Book of Bill Murray: A Critical Appreciation of the World's Finest Actor by Robert Shankenberg is a good reference source to Murray's career. It's made me realize I have some surprising holes in my Murray viewing resume (Why haven't I seen Quick Cuts or Saint Vincent?). Need to work on that. 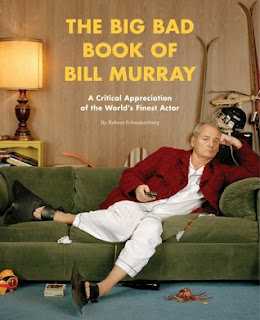 Here are some other movies I've seen that were released in 2003 that didn't make the 1001 Movie Cut, none of which feature Bill Murray.

Part I: You know you had young kids around in 2003 when these are some of the movies you've seen...

Brother Bear
I thought this pretty good animated feature had an unfortunate title. The title just made me picture The Care Bears...which can never be a good thing. 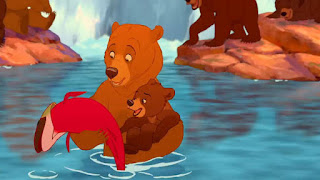 Brother Bear
The Cat in the Hat
"It was ruined when she bought it." I remember thinking this was a funny line from this adaptation. Other than that, read the book instead. 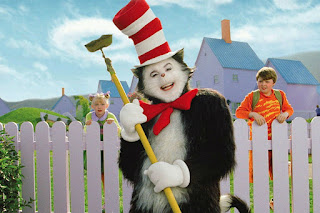 The Cat in the Hat
Daddy Day Care
I'm pretty sure me and the youngest watched this kid-friendly Eddie Murphy vehicle... 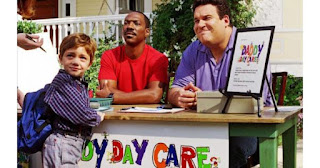 The Haunted Mansion
...unless I'm thinking of this kid friendly Eddie Murphy vehicle 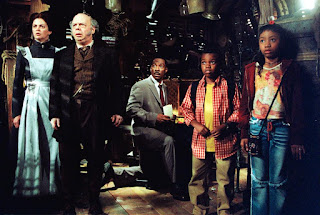 Elf
This is actually a pretty fun Christmas movie and one I should really check out again this holiday season. 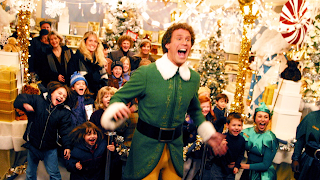 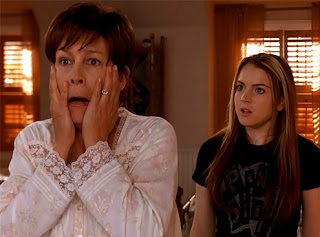 Pirates of the Caribbean: The Curse of the Black Pearl
I can't say I've ever been a big fan of this series. The first one was okay I guess. I do love the ride at Disney World. 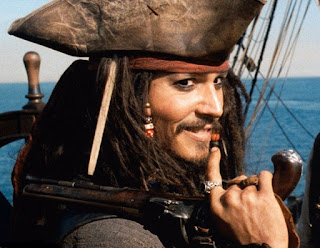 Pirates of the Caribbean: The Curse of the Black Pearl

School of Rock
I found this movie awfully fun and I confess that I almost always like Jack Black. I recently saw the Andrew Lloyd Weber musical stage version of this as well. It's a fun show, but the first name I think of when I think of head-banging, stick it to the man rock and roll probably isn't Andrew Lloyd Weber. 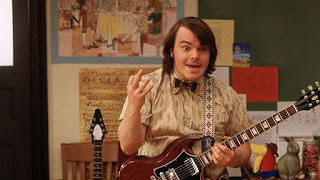 School of Rock
X2
I prefer this one to the first X-Men movie. I'm just a Nightcrawler fan, I guess. 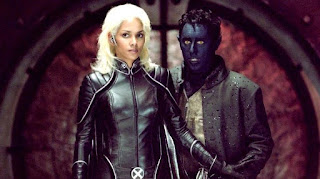 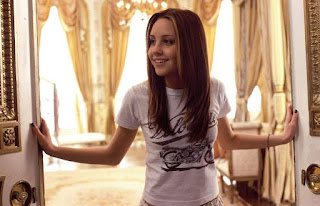 I'm still not sure What a Girl Wants

Gothika
The category being what it is, I actually did watch this one with my older niece, now that I think about it. I remember it as a pretty mediocre thriller/horror, though it apparently did do pretty well at the box office. 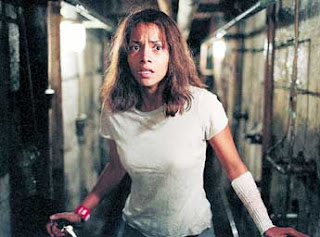 Gothika...did I spell that right?

American Splendor
Nice independent film about the life of acerbic comic aritist Harvey Pikar. I first became aware of Harvey through his rather combative interviews during the 80's with David Letterman. 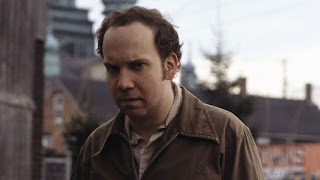 American Splendor: If Paul Giamatti's name is above
the credits, you are probably about to watch an indy film

Cold Mountain
Based on the Charles Frazer novel about a civil war deserter, this features Nicole Kidman and won an Academy Award for Renee Zellweger. I thought it was a pretty good drama...at least at the time. 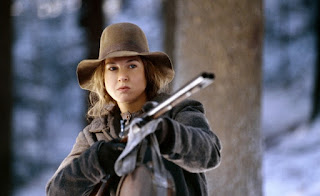 Dogville
Another Nicole Kidman movie and under the category of "movies my wife hates. It's sort of like Our Town meets an allegorical tale of American expansionism....Probably one you will either hate or love. 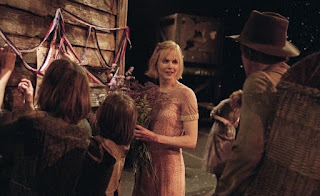 How to Lose a Guy in 10 Days
A really, really annoying "date movie." It just got on my nerves is all. 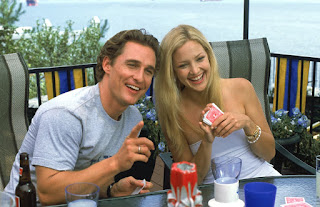 Intolerable Cruelty
This was a date movie more to my liking, though not usually considered among the best of the Coen brothers. 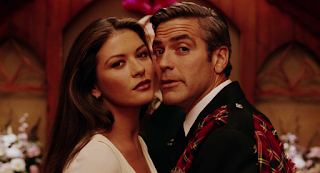 The Last Samurai
Entertaining flick with Tom Cruise as the drunk Wild West fighter who goes East to teach them how to fight, but gains enlightenment on the way. 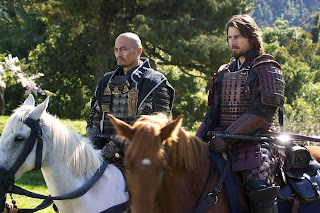 The Last Samurai
Are you sure giving the Japanese tips on how to fight
is a good idea?

Love Actually
One of those movies that a lot of people always said that you need to see. Well, I finally saw it and I did find it fun and most engaging. Several intersecting stories of love around Christmastime. We may have to make viewing this a holiday viewing tradition.

Master and Commander
Based on Patrick O'Brien's novels, this rollicking tale of high sea adventure directed by Peter Weir and starring Russell Crowe was a real crowd pleaser. So why didn't we get any sequels to this, yet endless sequels to Pirates of the Caribbean? 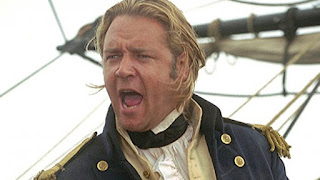 Master and Commander: Let's chart out a course
for a sequel!
Matrix Reloaded
The first Matrix movie I did like (My wife loved it.) This second one totally went off the rails for me. No shortage of action here for sure, but I truly lost the thread of the plot about half way through. 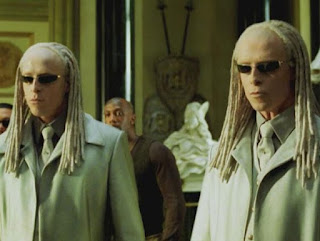 Matrix Reloaded: I had forgotten about these guys

A Mighty Wind
Maybe the most fun of all the Christopher Guest mockumentaries. It's about a reunion of folk stars for a public television reunion. Eugene Levy has got to be on the short list of funniest people on the planet. 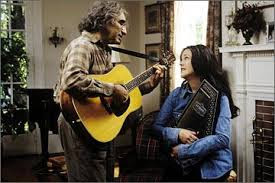 Levy and Catherine O'Hara in A Mighty Wind:
And I also love the song Kiss at the End of the Rainbow

Monster
The 1001 list has had two documentaries on serial killer Kathleen Wuornos in different editions. This is the feature film about Wuornos that has the Oscar-winning performance of Charlize Theron. There has also been a television movie about Wuronos. I prefer the two documentaries, though one viewing was enough for all of these films in all honestly. 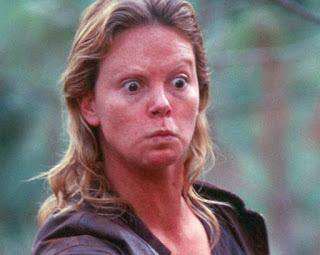 Mystic River
Spoiler; Now, really. Why doesn't Kevin Bacon arrest Sean Penn at the end of this movie? I know it's based on Dennis LeHanes story, but....just still pissed about that. 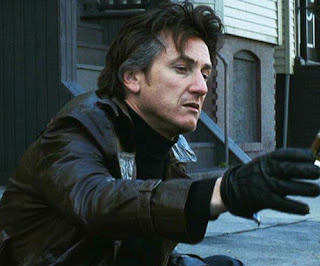 The Room
Tommy Wiseau's film has achieved the status as being one of the worst films of all-time. The making of this film was adapted into a book and the film, The Disaster Artist. If you don't want to watch the whole thing, you may want to watch the review of The Nostalgia Critic online. 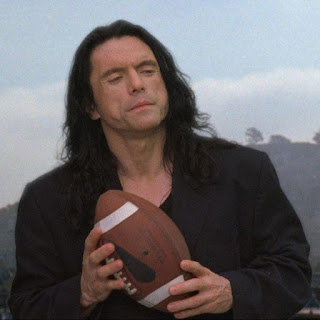 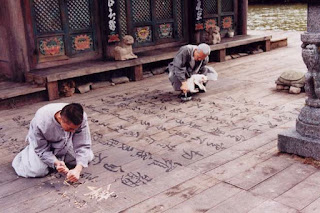 Spring, Summer, Fall, Winter and Spring does
a lot more than scratch the surface

The Station Agent
It did seem for awhile that every low-budget indie we showed at the library had Patricia Clarkson in it. This one also had Peter Dinklage. 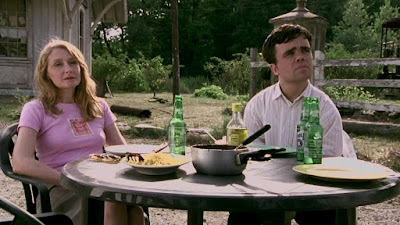 The Station Agent:
Clarkson and Dinklage staring at...okay, I don't remember what
they're staring at, but it's a pretty good film

Terminator 3: Rise of the Machines
One Terminator too many. It seemed to nullify all the good work they did in the first two Terminators by saying nothing they did mattered in stopping the rise of the machines. 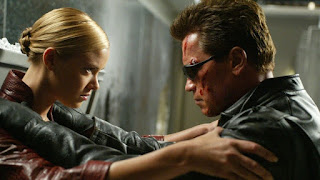 Machines are going to fail...or maybe it's just us
Terminator 3: The Rise of the Machines
Posted by 1001: A Film Odyssey is produced, directed and written by Chris, a librarian. at 4:14 AM