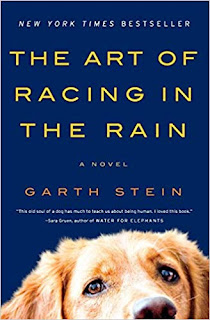 
I don't read a lot of fiction books about dogs, but The Art of Racing in the Rain by Garth Stein is one I had heard good things about and gave it a shot. It is a story from the point of view of a Golden Retriever named Enzo. Enzo is adopted as a puppy by a young race car driver named Denny and they go through much together through the years. This includes Denny's marriage, the birth of his daughter and later fight for custody with his in-laws. All through this, Enzo loves to watch Denny race, mostly on TV. The point of view of the book is from Enzo and is handled very well done by Stein.

In adapting this to film, we are obviously going to have a great deal of voice of narration. Enzo's voice is supplied here by Kevin Costner. I think it's about as well done as you can do with an adaptation of a novel that is from the dogs point of view. In other words, I got into Enzo's head enough to satisfy me. The last scene with the older Enzo riding around the track with Denny and saying how happy he is is......I...I definitely need a tissue here.

It's interesting that on Rotten Tomatoes the critics rating for this movie is 43% and the audience score is 96%! Underestimate dog loving movie goers at your own risk. 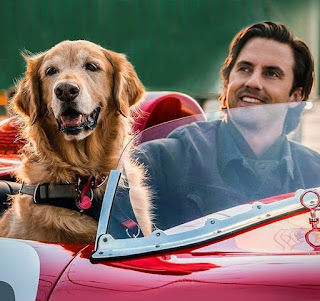 Enzo and Denny master
The Art of Racing in the Rain

In trying to find a good double-feature match for The Art of Racing in the Rain, I remembered a 1963 Disney movie called The Incredible Journey. 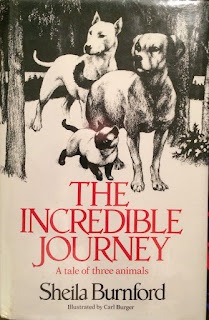 I read the book first by Sheila Burnford. It's a pretty quick read. It's about a young Lab named Luath, an older Bull Terrier named Old Bodger and a Siamese Cat named Tao who embark on trip back to the home where their family is staying three-hundred miles away! They encounter many adventures along the way , including: altercations with bears, porcupines, Tao nearly drowning and some humans who don't take too kindly to these strange travelers. However, most of the humans they meet along the way are helpful to our travelers. If you can accept the rather far-fetched premise of them being all able to make it all that way, then it's a recommended book for younger readers...maybe some older ones too. 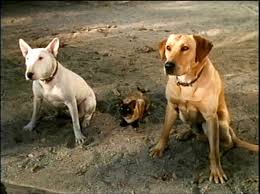 Old Bodger, Tao and Luath master the terrain
in The Incredible Journey

The film is narrated by Rex Allen. Rex was a former cowboy star whose familiar voice was part of many a Disney movie I watched growing up (Charlie, The Lonesome Cougar, Charlotte's Web and The Hound That Thought He Was a Raccoon come to mind).