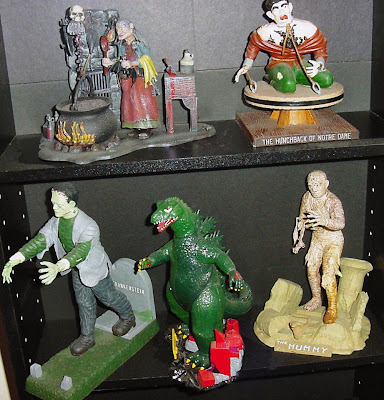 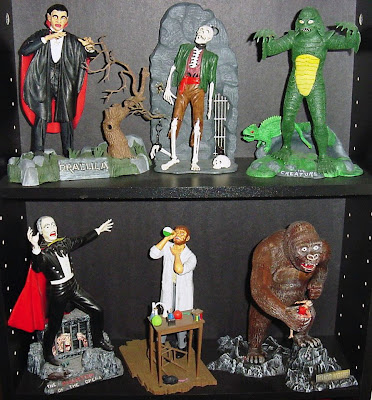 I still have fond memories of my collection of the Aurora monster models I use to put together in the 1970’s.

The core collection pictured here, taken from the website atomicantiques.com, includes all the Universal Studios monsters, as well as my personal favorite, The Forgotten Prisoner. Why was it my favorite? Because there was nothing but shackled skeletal remains left of him! The skull was screaming, but the scariest part to me when I was a kid was the fact that he had been, as the title suggests, forgotten. What torment he must have gone through.

I still have a Dr. Zaius model from Planet of the Apes, which didn’t quite fit in with the theme of monster models, but I liked it. I also had a glow-in-the-dark King Kong, which has long since gone to that big monster plantation in the sky.

Painting the models after you glued them together was optional, but I honestly like the look of them unpainted.

The Phantom model was maybe the coolest of the lot because it had a removable mask that you could attach to his face or put on his outstretched hand. There is also a man in a prison cell behind the Phantom's feet, which doesn’t have any relation to the movie, but was always a pretty frightening concept to me anyway.

In the 1925 film itself, the Phantom is described thusly:

His eyes are ghastly beads in which there is no light-like holes in a grinning skull!

His face is like leprous parchment, yellow skin strung tight over protruding bones!

His nose-there is no nose!

After Chaney is unmasked as the Phantom, it is an image that is still disturbing and unforgettable. The film has its plusses (The Phantom’s underground lair and Chaney) and minuses (plot holes and a few mediocre supporting performances).

Certainly no horror movie buff can be complete without watching The Phantom of the Opera, so get on it and don’t tell me you don’t like silent movies!
And while you’re at it, try to get one of the old monster models on Ebay or somewhere else and put it together. You’ll be glad you did. 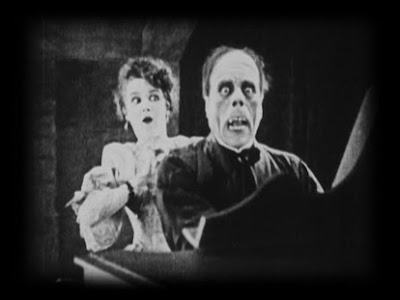