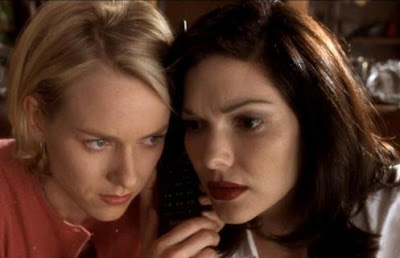 Chris 1, a librarian: Plainly speaking, David Lynch’s Mulholland Drive is one of the most creative works of art you will probably ever see on the silver screen. I don’t think I’m using hyperbole in calling it a modern classic, if not a masterpiece. The movie has a plot, of course, but recounting it here as if this were a normal viewing experience with a beginning-middle-end couldn’t possibly do it justice. Lynch throws so many plot twists out there; you can’t imagine how it is going to work out-yet it does. At times it takes your breath away with its mastery, but try to keep up! It’s not for the faint of heart! Lynch scatters his puzzle pieces on the floor, but always knows where to pick them up and place them even if the viewer doesn’t. Mulholland Drive brings magical realism into the narrative, complete with bilingual magic show. This has been done in literature by Herman Hesse, among others, but has never been as successfully put onto film before-not even by the maestro Ingmar Bergman. Some may criticize the sex scenes as being gratuitous, but I strongly disagree, as it is instrumental to show the passion inherent in the two main characters. People enter, interact, disappear for no apparent reason. You ask yourself what is the purpose of this? All I can say is-let the master wave his wand and work his magic. You may have to sit through repeated viewings to peel away Mulholland Drive’s many layers, but believe me-that would be no chore. What do you think, Chris 2?

Chris 2, a librarian: Well, Chris 1. I see you’ve bought a complete case of snake oil from that master huckster, Mr. Lynch. Now, I’ll speak plainly: With this convoluted mess of a TV pilot, Lynch was trying to recreate the limited success of Twin Peaks. When he couldn’t find any takers or couldn’t find a way out of the convoluted show he created, he just threw as much of it against the wall and hoped some of it would stick. It’s like he was saying, “This part is illogical, but that’s okay, if they don’t understand it-they’ll call me a genius.” And if I want an experience with magical realism, I’ll read just read Steppenwolf and eliminate “the auteur interpeter” middle man. And about the lesbian love scene that you seem to love so much; If that’s what makes great cinema for you, why don’t you stick with Bob Guccioni’s Caligula? As ridiculous as Caligula was, it at least had a plot you could follow! And don't compare him to Bergman or I may have to hurt you. If I watched Mulholland Drive again as you suggest, I suppose I might pick up more of the plot, but do I really want to? Let’s see: That answer would be: NO!

Chris 1, a librarian: I guess we have to agree to disagree you reptilian pinhead!

Chris 2, a librarian: Now that we can agree on, you inbred buffoon!
Posted by 1001: A Film Odyssey is produced, directed and written by Chris, a librarian. at 8:49 AM