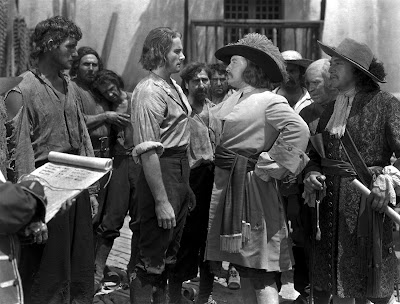 Captain Blood (1935)
Expectations: I knew it was a famous Errol Flynn swashbuckler.* I knew it was based on the the popular Rafael Sabatini novel of the same name. It has even been made into a graphic novel in recent years! I also thought I would like it more than Pirates of the Caribbean and less than Master and Commander.

After viewing: I learned a lot about this film from the DVD extras. Flynn and co-star Olivia De Havilland were both relatively unknown when cast in this film. It’s interesting when this film was a hit, how Warner Brother’s seemed to use the same cast (Flynn, De Havilland, Rathbone & Hale) and same director (Michael Curtiz) for many future films. My overall take: I liked it more than Pirates of the Caribbean and less than Master and Commander, so my expectations were met. And I’d like to add this phrase, “All right me hearties, follow me!” (You’ll have to excuse me, I just felt like typing that.)

And the Elisha Cook Jr. supporting player award goes to…I’ve got to give it to Basil Rathbone this time. Two films in a row I’ve watched Rathbone battle the suave Mr. Flynn to the death with the result being…well, you probably can guess the outcome. At least Sherlock Holmes was going to give Rathbone some leading man roles in the near future.

*I really didn’t want to use the word swashbuckler because it’s always used to talk about these kind of pictures, but it really does seem to fit.
Posted by 1001: A Film Odyssey is produced, directed and written by Chris, a librarian. at 1:37 PM