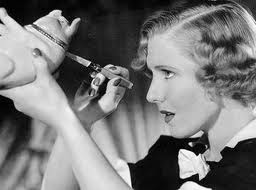 Easy Living (1937)
Expectations: I saw it on the library shelf and was directed by Preston Sturges and it was in the 1001 movie book. I usually enjoy 30’s screwball comedies, so I figured I would like it.

After viewing: Correction: This was only written, not directed by Preston Sturges. This also isn’t in the 1001 movie book! I wanted to look up something up about this movie in the 1001 book as I was watching it, but it wasn’t there! (Audible gasp!) I must have been thinking about The Lady Eve! Anyway, I’m glad I made the mistake. This movie is a lot of fun. There is a scene in a food automat (I think it's just cool to see an automatic diner) that is truly a slapstick tour de force. Lots of gags, misunderstandings, etc. Edward Arnold is well cast as the Wall Street banker. Jean Arthur is the cat’s meow in the lead.

And the Elisha Cook Jr. supporting player award goes to…Always some good choices in a screwball comedy, but let’s give it to Franklin Pangborn, always insufferable, snobby, prissy and gossipy (But not gay, the motion picture code of the era forbid the existence of homosexuals). His exasperated expression when something goes wrong or when there is something he thinks is a juicy tidbit is always hilarious.
Posted by 1001: A Film Odyssey is produced, directed and written by Chris, a librarian. at 1:33 PM