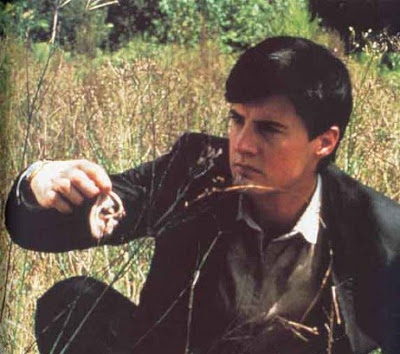 My niece, Kara Demetropoulos, has been staying in New York City as part of the Occupy Wall Street movement. She texted me some messages pertaining to what she was doing and also told be she saw the film Blue Velvet while she was up there. So I decided to watch this unusual film again and relate quotes from that movie to the texts she sent me as well as I could.

Kara: I’ve been dumpstering for food with a freegan I met. We dumpster for clothes, electronics, things we can sell, etc.
Blue Velvet: Are you the one that found the ear?

Kara: Got out and marched on Wall Street.
Blue Velvet: Here’s to an interesting experience…Man, I like Heineken!

Kara: Witnessed police brutality at its finest.
Blue Velvet: Why does there have to be so much trouble in this world?

Kara: Now I’m staying with this really nice woman who is going to let me stay until I find a job and get my own place.
Blue Velvet: In the dream, there was our world. And the world was dark because there weren’t any robins. And the robins represented love and for the longest time there was just this darkness. And all of a sudden, thousands of robins were set free. And they flew down and brought this blinding light of love And it seemed like that love would be the only thing that would make any difference. And it did.

Good luck, Kara.
Posted by 1001: A Film Odyssey is produced, directed and written by Chris, a librarian. at 8:45 AM