Awhile back,. someone recommended I read the Charles Portis novel True Grit for my book group. After the success of the Coen Brothers new film version of the novel, an Audiotape version of Portis’s book was recorded for the first time. I listened to the reading. A fine rendering by Donna Tartt. I thought it was a simple, but involving story of a 14-year-old hiring a surly U. S. Marshall to help her get revenge on the man that killed her father.

Then I watched the 1969 version of the movie with John Wayne, which I had never seen before. I followed that by watching the Coen Brothers version, which is listed in the latest editiion of 1001 Movies You Must See Before You Die.

After that, I listened to the book again. (It’s pretty short, only 6 discs in Books-on-CD speak.)

The night of my book group was a dark and stormy night. Only a couple of people showed up. Both had positive things to say about True Grit. One lady in my group was even inspired to purchase other books by Charles Portis. That made me glad.

As far as the movies go: I did appreciate the 1969 version. I’ve always found John Wayne rather hit or miss depending on his role, but this was truly a part he seemed to get his teeth into. He wasn’t playing John Wayne as he often did; he was the drunk, one-eyed U. S. Marshall Rooster Cogburn. But since Mattie Ross is the one telling the story, the success of the movie rides on her. Kim Darby as Mattie Ross, I liked very much.

I didn’t think the Coen Brothers version would be able to top it, but I liked it as well. It is interesting that though many parts of the new movie vary from the original, I was struck by how some scenes between the two movies were very similar. One example is the scene where Mattie negotiates with the businessman to take back the horses her daddy bought before he was killed and is a highlight of both movies. And the staging of the scene where Rooster rides against the four members of Ned Pepper’s seemed to be almost identical in the two films

But I can see by the clock on the wall that I need to pick a winner. And the winner is….Charles Portis’s book. Or at least the very least, the Book-on-CD version. 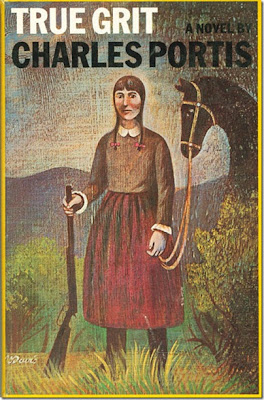 Posted by 1001: A Film Odyssey is produced, directed and written by Chris, a librarian. at 4:47 AM