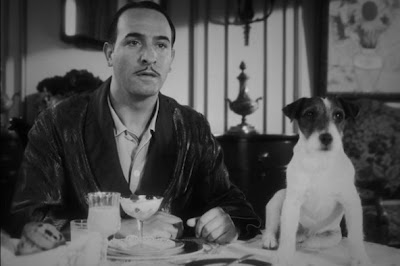 I thought it was remarkable that a black and white silent film could not only get made in this jaded day and age, but also gather enough critical momentum to win the 2011 Best Picture.

I agree with the critic that said that the film received so many accolades, that there seemed to be a bit of a backlash against it. Some began calling it pretentious or gimmicky. That's too bad, really. Removing all the awards and accolades it received and judging it by its own merits, it's creative, enjoyable and you gotta love that dog! It will be a welcome addition to the next edition of the book.

(If for some reason the editiors of 1001 Films You Must See Before You Die decide not to include The Artist, you need to give my a call.)
Posted by 1001: A Film Odyssey is produced, directed and written by Chris, a librarian. at 7:01 AM