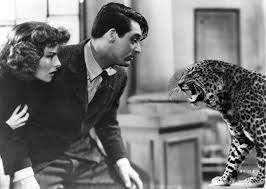 
In this screwball comedy, Cary Grant plays an awkward paleontologist who gets involved in a quest for a missing dinosaur bone with a flighty rich girl (Katherine Hepburn). Hepburn's pets, Baby the leopard and her dog that wants the dinosaur bone for his own sinister purpose, befuddle Grant even more than Hepburn does.

Bringing Up Baby really shows Grant's comedic ability (physical and verbal) and I actually prefer this one to the more popular later Hepburn/Grant teaming, The Philadelphia Story.

They let them get away with that in 1938?: In a memorable scene, Grant is wearing women's clothing and jumps and shouts that he has turned into a fairy! According to Peter Bogdanavich, the strict censors of the time probably didn't even know the double meaning of the word so saw no reason to cut the line from the film.
Posted by 1001: A Film Odyssey is produced, directed and written by Chris, a librarian. at 4:52 PM