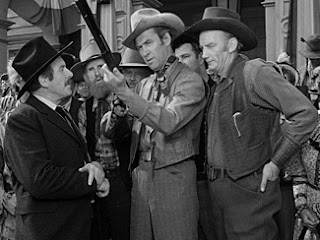 
Creative Anthony Mann western in that the main character is...a Winchester '73 rifle. It may not be as cool as an Official Red Ryder Carbine-Action Two-Hundred-Shot Range Model Air Rifle, but it practically turns everyone who touches it into Gollum from Lord of the Rings!
It goes through the hands of several characters: Jimmy Stewart (the main star), Dan Duryea (as a depraved heavy), Shelly Winters (during the very brief time she could still play a leading lady), Charles Drake as Steve Miller, (but he gets offed and loses the gun quicker than you can say abracadabra), Tony Curtis (When he was really still more Bernie Schwartz than Tony Curtis) and Rock Hudson as an Indian chief. I'll say that again...Rock Hudson as an Indian chief! But since Rock is playing an Indian, we know he has to get killed half way through the film and lose control of the gun.
Winchester '73 is my favorite of the three Anthony Mann/Jimmy Stewart movies on the list for what it's worth.
Posted by 1001: A Film Odyssey is produced, directed and written by Chris, a librarian. at 3:59 PM