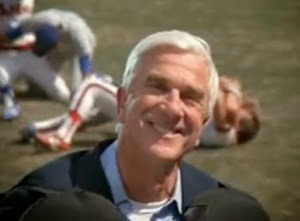 (1988)
The Naked Gun-In the early 80's, a new comedy series called Police Squad! came on television that wasn't your typical sitcom fare. It was in the broad style of the movie Airplane! (and from Airplane! creators Jim Abrahams and the Zucker brothers). The over the top humor of these films can be hilarious (most of Airplane!) or fall flat when not done with the right touch (most of Airplane II, without the Zuckers and Abrahams). I thought Police Squad! did have the right touch for the few episodes it was on and it also won praise as something totally different for its time.

Unfortunately, it was a little too different to get any kind of a mass audience and was canceled after a handful of episodes. But the Zuckers and Abrahams didn't give up on the idea and the Police Squad! idea was resurrected in the full length feature The Naked Gun: From the Files of Police Squad! The silly but funny gags and the deadpan delivery of Leslie Neilsen made the movie a box office hit. It also spawned two successful sequels. The TV show that failed as a series became a very successful movie franchise!

My friend Droppo (and his baseball blog at http://atlantabraves19701980.blogspot.com/) wants to argue with me that The Naked Gun is actually a baseball movie. I understand that he sees everything through a baseball lens and I admit the scene with Leslie Neilsen enthusiastically calling balls and strikes is my favorite part of the movie. But it's not a baseball movie, Droppo.

Akira-I suppose my first experience with Japanese animation came with my viewing of the Speed Racer and Kimba the White Lion cartoons when I was a kid.  As I grew older, I began to think of these Japanese cartoons as being exaggerated and a bit silly. The later fascination of my children with Pokemon and Sailor Moon didn't help change my mind. But in going through the anime movies on this list with my son, I began to appreciate the genre. The Miyazaki films in particular and also the somber Grave of the Fireflies were all strong films.

Katsumiro Otomo's Akira is a whole different kettle of fish when compared to the Miyazaki films. I suppose Akira could be labeled as a futuristic, cyberpunk, apocalyptic, manga, action adventure extravaganza...with big monsters! I know these type of films (and their graphic novels) have their fans and I'm glad I got to watch this one, but I don't think I'll make a regular viewing habit of the genre (If I've even properly labeled what this genre even is!.)

Now where can I find some reruns of Speed Racer?

The Naked Gun and Akira may have made the 1001 list,  but here are a few more films from 1988 that I’ve seen that didn’t quite make the 1001 Movies You Must See Before You Die cut.

1.     The Unbearable Lightness of Being-I'm surprised this movie adaptation of Milan Kundera's book never made the 1001 book. Now that I've actually read the book, I'm wondering how they ever made a movie out of this at all! But I still love Lena Olin and her bowler hat.
2.     Talk Radio-Movie based on the Eric Bogosian play and starring Eric Bogosian where the best thing in it is definitely Eric Bogosian!

3.     Track 29-I remember watching this with friends when it first came out on video. One of the friends said to his girlfriend who rented it after it was over, "Thanks for checking out the weirdest movie I've ever seen!" I wouldn't go that far, but a Nicholas Roeg movie with Gary Oldman and Theresa Russell has got to he a little weird.

4.     The Seventh Sign-Have a feeling this modern day tale of the apocalypse probably wouldn't date too well if  I saw it again. Demi Moore is the chosen one!

5.     Scooged-Movie featuring Bill Murray as a modern day Scrooge seems to be better thought of now than when it first was released. Bill is a favorite of mine and so is Karen Allen, so I'm prone to give this one a thumbs up.

7.     My Neighbor Totoro-Speaking of anime...Miyazaki is well represented in the 1001 book, but I do wish they had still found room on the list for this one.
8.     Midnight Run-Oddball teaming of Robert De Niro and Charles Grodin worked here (from what I remember seeing it twenty-five years ago).

9.     High Spirits-Remember those years in the late 80's when it seemed that Steve Guttenberg was in every other movie?

11. Last Temptation of Christ-Boy, this movie caused a scandal when it was released. But put up against The Passion of the Christ, I'd go with this one. Sorry, Mel.

12. Dirty Rotten Scoundrels-Have I actually seen this movie? I know I've seen clips of it so many times over the years, but maybe I just think I've seen it. No, I'm going with I've seen it and leave it at that.

13. Cocktail-And speaking of seeing a movie in segments...I've definitely seen all of this Tom Cruise movie, just not in order. TBS has shown this movie at least a gazillion time over the last twenty-five years and I'm sure I've seen it all at some point.

14. Twins-I had a friend who told me they knew someone whose favorite movie was Twins. And not that I don't like Twins, but how can it be your favorite movie?

15. Beetlejuice-Come on 1001 book editors! How can you not give a little love to Beetlejuice?
Well, it's time for me to peel off the remains of my Dukakis for President bumper sticker and leave 1988 for now. I'm sure I'll return. 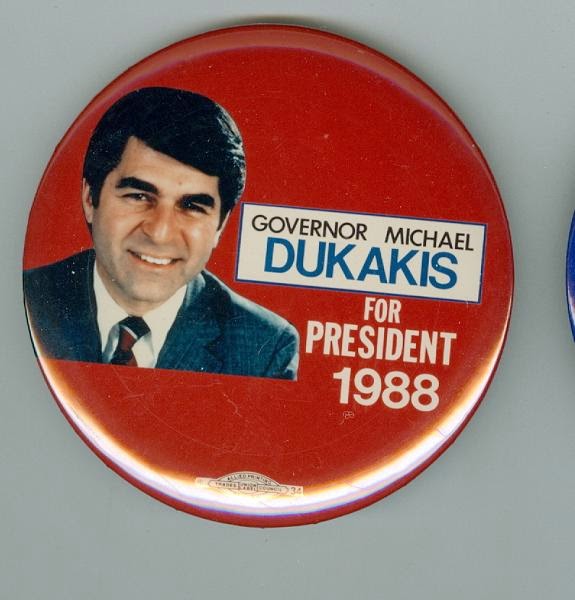