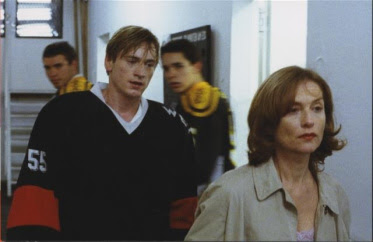 The major conflict of The Piano Teacher is the duality between a woman named Erika who is classically trained in the arts but has secret sexual desires, many involving sexual masochism and humiliation. I don't know if we are supposed to sympathize with her, as we do  feel bad about parts of her upbringing, but we can't excuse some of the things she does either. But I think that's the point, our feelings toward her are not black and white and the film addresses these points. I did find the look into that duality as being very interesting, if often unpleasant.
Posted by 1001: A Film Odyssey is produced, directed and written by Chris, a librarian. at 9:37 PM