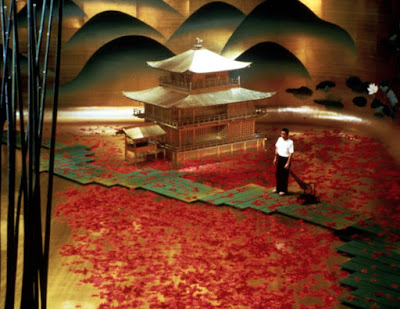 How do you depict the life of a great writer or poet using a method that is worthy of the uniqueness of their vision? Off-beat depictions of this type include Sergei Parajanov's off-beat biography of poet Sayat Nova, The Color of Pomegrantes or Todd Haynes take on Bob Dylan in I'm Not There. Paul Schrader's Mishima is along those lines as well. It depicts events of writer Yukio Mishima told in flashback, in the context of the four seasons of the title and with dramatizations from Mishima's novels thrown in. And it all seems to make sense somehow! Not exactly the stuff that lends itself to commercial success, but certainly an artistic success for Schrader and a noteworthy entry for the 1001 book. 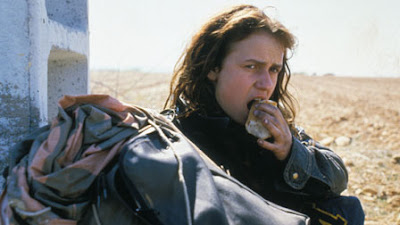 A different type of non-commercial film in Agnes Varda's Vagabond. Like Mishima, It also is told in flashback of a character that we know has died and the film retraces the steps of the tragic heroine. The movie has an occasional documentary feel with characters in the film describing their encounters with the main character. Her journey is unpleasant even during the best of times, but it's a pretty fascinating...assuming you are in the mood to sit through a such a somber journey.


------
There were some films that did not make the 1001 movie cut from 1985 that I have seen. Here are a few. I'll also try to determine if I should ever revisit any of these films again.
1.  After Hours-One man's crazy journey through Soho one night made for a fascinating film and a very different trip from Marting Scorcese.
Should I Revisit? I think this would be a very worthwhile revisit. 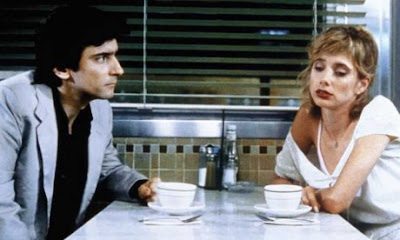 Griffin Dunne dreams of this night being over in After Hours

2. A Chorus Line-One singular sensation....Seems the musical was more popular on stage than on film from what I remember.
Revisit? More likely I'd see this on the stage.

3. Desperately Seeking Susan-Is this Madonna chick a flash in the pan? Movie didn't do much for me.
Revisit? Hope not

4. Clue-I remember this film based on the board game had several different endings that were all thankfully included together for the video release. Clue got panned when it came out, but it's not without its fans and does have an interesting cast going for it and is okay if you're in the mood for something light.
Revisit? Maybe...and probably more likely for me than it is I'd be revisiting the actual game itself. 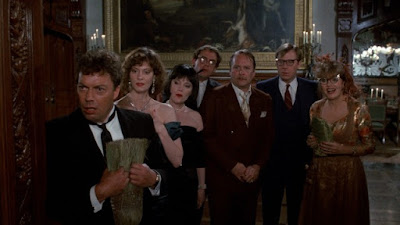 Colonel Mustard, Professor Plum and others
dream of being taken seriously in Clue

5. The Emerald Forest-I remember thinking this movie as having a pretty strong environmental statement. Am I remembering that right?
Revist? Maybe if I'm ever in a Powers Boothe/Environmental kind of mood.

6.Fletch-A comedian roasting Chevy Chase once said something like , "Chevy Chase, a man whose career ambition seemed to be making four good films and forty bad ones." Fletch is one of the good ones.
Revist? I'd have to be with someone who says, "Hey, you want to watch Fletch!"

7. Cocoon-An alien culture bringing a fountain of youth of sorts to a group in a retirement home is a fun trip. It has been awhile since I've seen this one.
Revist? I could see watching this again...no desire to see Cocoon II.
t 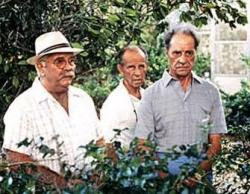 Wilfrid Brimley, Hume Cronyn and Don Ameche
dream of getting that young feeling again
in Cocoon

8. Jewel of the Nile-Let's make an Indiana Jones type movie, but with Michael Douglas and let's give him Kathleen Turner as a leading lady. I think the results were pretty good from what I remember.
Revist? I don't see making an effort to see this again.

9. Jagged Edge-Courtroom drama whose twist and turns I figured out pretty quickly. Others seemed to like it better.
Revisit? Only if I forget who did it. I currently remember.

10. Lost in America-Fun trip in a Winnebago from a couple just trying to be like Easy Rider without being anything really like the guys in Easy Rider.
Revisit? Yes, I'd like to hop on the Winnebago again. 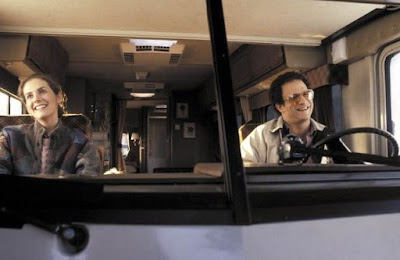 11. The Mean Season-Reminded me of Absence of Malice and I know it had Mariel Hemingway in it. That's about all I remember from it.
Revist? Don't see it happening.

12. Police Academy 2: Their First Assignment-If you can recount the plotlines of the individual Police Academy movies that you are a better man than I.
Revist? If one of the Clinton family comes by and wants to watch it, I guess I'll pop it in the ole VCR.

13. My Life as a Dog-Swedish coming of age story is still one of my favorite movies of the decade. Why isn't this in the 1001 book?
Revist? It's a knockout! Absolutely! 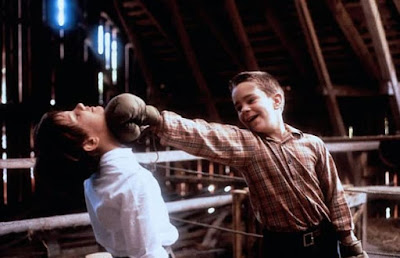 15. Return to Oz-Pretty clever touches, but Wizard of Oz is a mighty hard act to follow.
Revist? Probably as likely as my watching The Neverending Story Again.

16. Pee Wee's Big Adventure-The definitive Pee Wee movie. See http://1001afilmodyssey.blogspot.com/2014/07/the-bicycle-thief-1948-italy-pee-wees.html for a comparison between this film and The Bicycle Thief.
Revist? You should definitely see this one every few years or so. 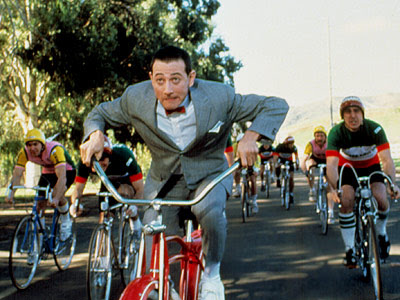 17. Mask-Sad story with Cher as a motorcycle mama raising a kid who suffers from craniodiaphyseal dysplasia. Not to be confused with the later Jim Carrey film, The Mask...not that you probably would.
Revisit? If someone says let's have a Cher or Peter Bogdonavich marathon, I guess.

18. Twice in a Lifetime-You know a movie doesn't leave much of an impression if the only thing you can remember about it is that Brian Dennehy was in it.
Revist? Sorry, this one is only for viewing once in a lifetime.

19. A View to a Kill-Last of the Roger Moore Bonds and not the best of the film series, but I think Roger was a most capable Bond...even though he has a lot of haters.
Revist? If I ever want to have a Bond marathon, A View to a Kill wouldn't be all that high on the list. 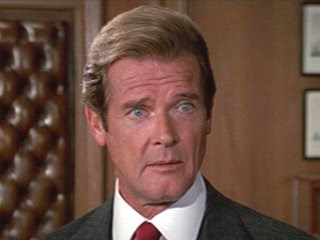 20. Witness-Nice detective story and interesting incorporation of the Amish people into the storyline.
Revist? Even though I like the film and have only seen it once, I really don't have that great a desire to watch it again...maybe I'll just find the scene on YouTube where the undercover Harrison Ford posing goes all radical Mennonite and punches out a jerk.

21. Rocky IV-Starts off well with James Brown and Apollo Creed...but then just disintegrates once Rocky starts training to fight the Russian.
Revist? If I can change and you can change..everybody can change, but I ain't watching this one again.

22. Boggy Creek II: And the Legend Continues-The trilogy is...The strange original, which is worth seeing just for it's oddness. The awful Return to Boggy Creek, which does at least have Dawn Wells in it and a reformed Boggy Creek monster. Boggy Creek II is numbered II even though it is the third one. It is best seen in the guise of an MST3K episode. I know there have been recent movies with Boggy Creek in the title, but I'll leave those for study by future students of campy films.
Revist?  I just did and my Boggy Creek trilogy marathon is now complete. 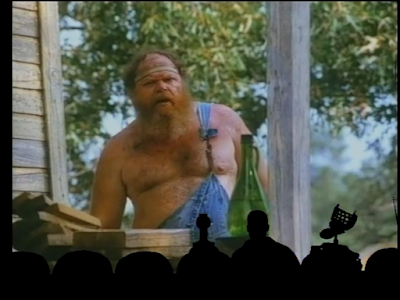 Rustic auteur Charles B. Pierce probably dreamed his Boggy Creek II
had been respected enough not to be lampooned on MST3K

23. White Nights-Interesting (to me) two of the three main movies I saw during this period at the Plaza Theater featured Gregory Hines. Not sure how I missed going to see Wolfen or Running Scared there.
Revisit: I'll let it remain a Plaza Theater memory. (see below)

24. A Nightmare on Elm Street II: Freddy’s Revenge-Can't remember the details of this one...maybe need some kind of dream therapy.
Revist? -Only if I want to see every movie in this series...in other words...I doubt it.

25. Runaway Train
I just watched this one. A good action piece about a couple of escaped convicts on a...well, a runaway train. It also boasts good performances from Jon Voight and Eric Roberts as the escapees.Interesting that both of them were Oscar nominated for this action flick...and deserved to be. Also give credit to director Andrei Konchalovsky for the solid pacing and a cabal of writers, including future Reservoir Dog Eddie Bunker! It's also interesting that this is also based on an earlier screenplay from Akira Kurosawa. I'm sure this helped with the films success (Artistically anyway!) 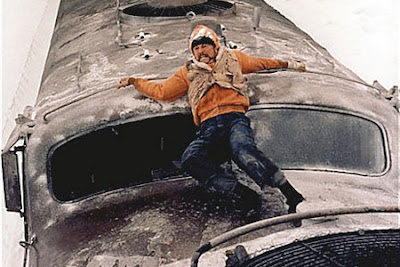 Jon Voight dreams of escape on the Runaway Train 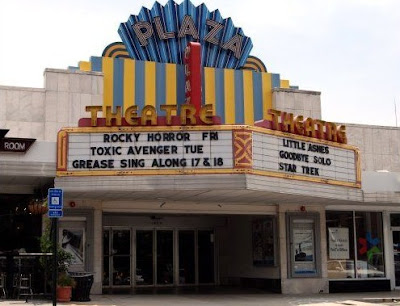 The legendary Plaza Theater in Atlanta

The theater was located next to the Plaza Drug pharmacy, which showed the same commercial on late night TV of a family from the 1950's well into the late 70's. On the other side was the all-night eaterie, Dobie's Good Foods, which was a good place for a late night 1985 cheeseburger.

The theater itself is still there, but it will always be the place I got lost in After Hours at a late night showing and White Nights as a matinee and entered The Cotton Club the year before. I didn't see that many movies there, but the memory is strong with this one. 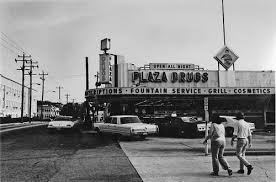 The legendary Plaza Drugs pharmacy in Atlanta
Posted by 1001: A Film Odyssey is produced, directed and written by Chris, a librarian. at 11:00 AM