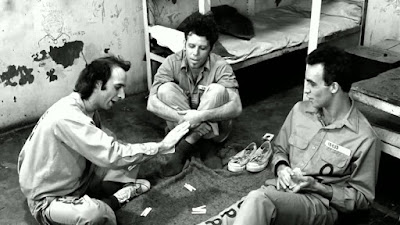 The trio of prisoners in Down by Law

The list at the bottom of this page shows I saw a lot of movies from this year that were the biggest hits of the year. But I did miss the two smaller movies until now, Down by Law and Tampopo. Down by Law is Jim Jarmusch's film about a trio of falsely accused prisoners who were set-up busting out of jail. It is another intriguing character study from Jarmusch and I admit I've become a fan of his films (better late than never on the Jarmusch bandwagon). The engaging trio of Tom Waits, Roberto Benigni and John Lurie is fun to watch. Don't expect the road often taken by other films plotwise, but hopefully you will enjoy the journey. 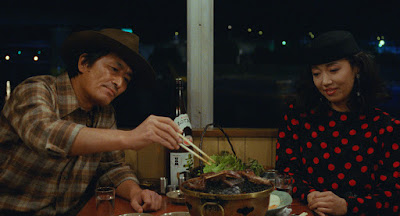 It's what's for dinner in Tampopo

It seems that in recent years, people are more and more obsessed with food as entertainment. The cooking channel, cooking contest shows and several movies. Big Night, Chef, The Cook, the Thief the Wife and Her Lover and Babette's Feast are movies that come to mind that have followed Tampopo. Tampopo may have been one of the first to tap into this vein over thirty years ago. It's the story of a trucker who helps a stranger with a noodle shop make improvements to her building, her food and her promotions to make herself a success. But how do you make this entertaining? That's the question that may have come up in the beginning, but Tampopo succeeds by being light, breezy, and having engagingly  off-beat characters. It also interspersed the main action of the film with little vignettes whose only relation to the main storyline is that they involve food. These "subplots" threw me off a bit at first, but once I realized what they were, I thought they did add flavor to the overall piece.


Here are some of the movies I've seen released in 1986 that didn't quite have the right stuff to make the 1001 movie cut. My wife was next to me as I was writing this and wanted to offer her opinion on some of these movies.

1. Howard the Duck-I remember the Howard the Duck comic strip as being a pretty creative undertaking from Marvel about a duck caught up in a universe he didn't belong to. I saw the movie based on it the day it opened...and to say it didn't translate all that well to the big screen might be a bit of an understatement. I do admit I was happy to see the Howard the Duck cameo at the end of Guardians of the Galaxy. It's been over thirty years since I've seen -I think I'm ready for another viewing! My wife says: "I'm not really familiar with Howard the Duck. Didn't he do a record of Disney sing-a-longs?" 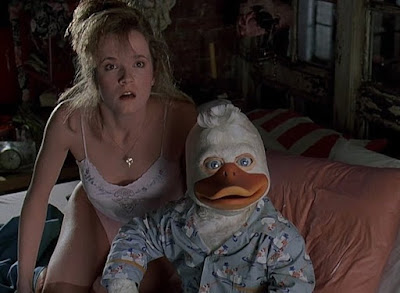 in Howard the Duck

2. 52 Pick Up-I have to admit that the only thing I remember about this John Frankenheimer crime thriller is....Vanity's strip tease scene. Just being honest. I'm sure the rest of the film is just fine, too.
Probably wouldn't watch again, but I dont rule out catching Vanity's striptease scene on Youtube. My wife says: Nothing, because I did not wish to talk about the striptease scene with her.

3. 9 1/2 Weeks-I remember this controversial (at least at the time) story of kinky sex and obsession as not doing too much for me.Should I revisit? I'd probably watch Fifty Shades of Gray before I'd watch this again. My wife says: "Twisted, not my idea of what romance should be."

4. Crocodile Dundee-Probably the defining movie of 1986 (Though some may want to give Top Gun that title but they are wrong.). Dundee is the story of an American journalist who goes to Australia to interview the eccentric crocodile hunter named Dundee. The first half of the movie is the culture clash in Australia and the second half has Dundee going to New York and the culture clash is even more pronounced and has many comical moments. Star Paul Hogan made Crocodile Dundee II a couple of years later. I think he should have cranked out a few more while the character was hot, but that's just me.Should I revisit? I'd like to see the first Crocodile Dundee again. I'll probably pass on Crocodile Dundee in Los Angeles.
My wife says: "Top Gun was definitely the defining movie of 1986!" I still say it was Crocodile Dundee. Opinions differ. 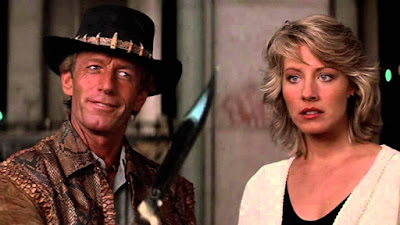 6.F/X-Thriller dealing with makeup and special effects that I saw on the USA network thirty years ago. My vague recollection of F/X is that it was pretty good.
My wife says: "I haven't seen it, but it sounds interesting."

7. Back to School-I first remember Rodney Dangerfield from the Dean Martin shows during the 70's. Despite being a very funny self-deprecating stand up comedian, he seemed an unlikely candidate for movie stardom in the 80's. But Caddyshack, Easy Money and his valedictorian address in Back to School gave Rodney a brief but deserved ride as a movie star. I saw all these films at the theater, but could never bring myself to go see Ladybugs. My wife says Back to School is "ridiculous, but enjoyable." 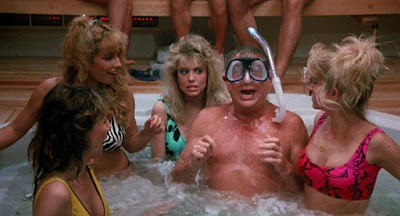 Rodney Dangerfield getting his Longfellow straightened out
in Back to School

8. A Great Wall-Saw this Chinese film about a Chinese family adapting to life in America when it came out. I remember it as a good film.

9. Gung Ho-Similar cultural classes in this comedy as in A Great Wall, though this Ron Howard movie was a comedy about Japanese automakers trying to whip their American counterparts into shape. "If you guys are so great..how come you lost the big one!"  I say it was amusing. My wife says she "liked that one."

10. True Stories-Laconic Talking Head frontman David Byrne narrates this tale of various American eccentrics based on stories you might find int the tabloids. I liked the movie...but loved the Talking Heads soundtrack! I say The Talking Heads were the band of the 80's. My wife does not agree and thinks it's Bon Jovi or something like that. 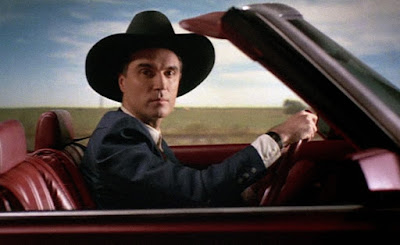 David Byrne searches for some real Americans in True Stories

11. The Golden Child-Eddie Murphy comedy about a....search for a chosen one I think it was? It was a big hit, but not really that memorable. My wife says: "It was mostly silly."

12. Gothic-I went through a Ken Russell phase when I first got my VCR. This eccentric dramatization of weird goings on at a chateau with Shelley, Keats, Wollstonecraft etc. is....one that sounds like I need to see again.

13. Sid and Nancy-Rough and tumble, yet somehow endearing biopic of the ill-fated Sex Pistol Sid Vicious and his girlfriend.Nancy Spurgeon is definitely worth seeing. My wife says she hasn't seen it. My friend Mark, on the other hand, was obsessed with this movie and Gary Oldman...So much that he made me watch Track 29! 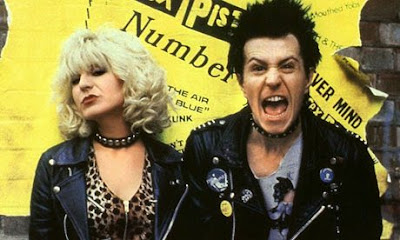 Gary Oldman probably not singing My Way in Sid and Nancy

14. Ruthless People-Hit comedy about Danny Devito setting up kidnapping of this own wife played by Better Midler. My wife says it was "hilarious and a great movie." I like it too, though I tend to not throw around the word "great" so casually.

15. The Mission-Roland Joffe's epic film about Jesuit missionaries in South America might be a better film to use the "great" label. How did this manage to not be in the of the 1001 book? 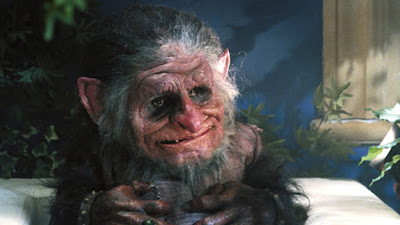 The adorable title character in Troll

17. Wildcats-Another one of those 80's Goldie Hawn comedies that I seem to remember nothing about. Luckily, my wife is here to say that  she "Loved it, but wouldn't want to see it again." Mixed signals from her on this one, I'd say.

18.Hoosiers-Inspirational basketball movie with Gene Hackman as the coach is indeed a crowd pleaser, though not nearly as much as the later documentary Hoop Dreams.

19. The Name of the Rose- Considering Umberto Eco's medieval novel about a murder at a monastery is not at all conducive to film adaptation, this film does as pretty decent job of it. Read the book, though...even if you have to kind of thumb through a lot of the Latin. My wife calls the movie "unsettling." 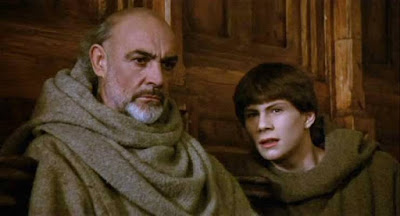 Law and Order: 1327...Sean Connery and Christian Slater in
The Name of the Rose

20. Soul Man-Guy gets minority scholarship by joining a minstrel show. Isn't that what this was about? My wife said she "found it amusing at the time."

21. Sweet Liberty-Seems like Alan Alda directed comedies were on the downslide at this point. It was okay from what I remember. My wife had never heard of it. 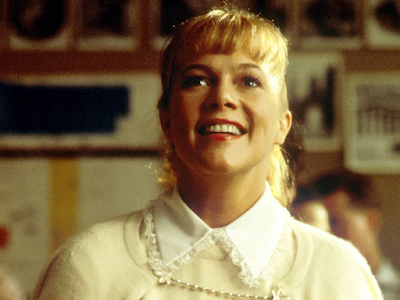 23. Seize the Day-I remember this Robin Williams drama was one of the first things I rented when I got a VCR. I don't remember much of the details of it, but my wife says that she would watch anything with Robin Williams in it.

25. Little Shop of Horrors-Fun musical update of the old American International movie is even better if you see it at a cinema and draft house that serves pitchers of margaritas. Just saying. Interestingly, my wife called it "adorable." 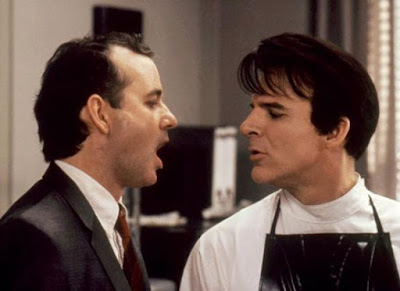 26. That's Life-All I remember is a friend took me to see this movie and Jack Lemmon and Julie Andrews were having some sort of middle-aged marriage crisis.

27, The River's Edge-A crazy Dennis Hopper, a crazier Crispin Glover, an unidentified dead body, a blow-up love doll is a combination of which cult classics are made.

28. The Color of Money-Latter day sequel to The Hustler gave an Oscar to Paul Newman that he probably should have won for the original film. 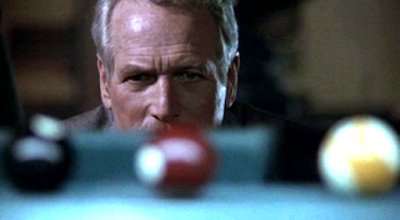 29. Down and Out in Beverly Hills-see
https://1001afilmodyssey.blogspot.com/search?q=saved+from+drowning
My wife called it, "Okay, funny. Wouldn't want to see it again."

I say the dog in the first scene of Down and Out in Beverly Hills looked a lot like my childhood dog, Humphrey. 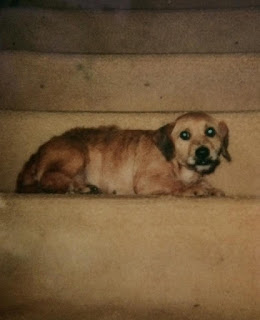 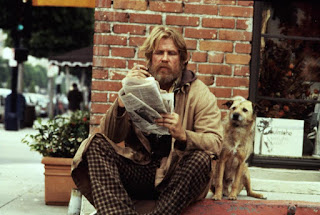 30. Something Wild -It took a long time for me to finally see this off-beat Jonathan Demme comedy about a straight-laced businessman getting involved with a woman who is anything but straight laced. It took me awhile to get into it, but I honestly think I would have liked it better if I had seen it 1986. Still worth seeing. My wife did see it in the 80's and described it as "quirky fun." I like that. Let's go with "quirky, fun" then. I did point out to her that this was an early Jonathan Demme film and was saddened to hear that he died later that same week. 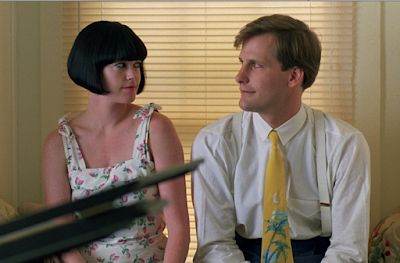 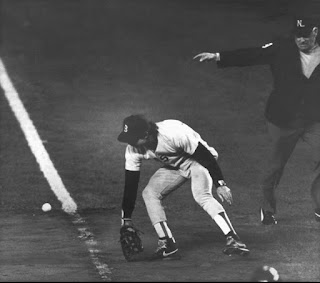 Posted by 1001: A Film Odyssey is produced, directed and written by Chris, a librarian. at 1:18 PM