I still have a few more  1930's Hollywood films from the 1001 list and a few others I've wanted to see thrown in for good measure) for me to go through. And since this was such a golden era for supporting players, I will give my Elisha Cook Jr. award for supporting players for each movie mostly because I enjoy doing it.

The 1001 book puts three Greta Garbo movies on the must see list. Ninotchka, the classic comedy from 1939, Camille, the romance novel come to life from 1936 and Queen Christina, the historical drama from 1933. Here Garbo plays the 17th century Swedish queen...who I have to admit reminds me of latter day Disney heroines in that she wants to escape from that provincial life like Belle in Beauty and the Beast, wants to escape the trappings of royalty like Jasmine in Aladdin and feels the need to pose as a man like the title character in Mulan. Christina does escape the castle and pose as a man, though it's a bit of a stretch to think that everyone can't tell that the exquisite Garbo is really a woman just because she wears a big hat. If you like Garbo, historical dramas, or  pre-code talkies in general, you might find Queen Christina to your liking.

Censor alert: There is a scene with Christina and her lover in bed together which I'm sure would never have passed muster if the film had been released the next year after the restrictive Hays Code limiting what was appropriate to be shown in films was implemented.

And the Elisha Cook Jr. supporting player award goes to...Lewis Stone. Stone seemed to play mostly serious, dignified roles in the few films I've seen him in. He went on to play the judge in the Andy Hardy film series years after Queen Christina. The film I remember him most was called The Man Who Cried Wolf, a movie I saw forty years ago on television...but I believe I can still recount the plot of that one without using my Wikipedia crutch. Stone plays a ne'er do well who keeps confessing to the police about being guilty of crimes he committed. He has nothing to do with these crimes and the police always find out and let him go. Little does anyone know, Stone is setting up that he is about to commit an actual murder. After the deed is done, no one believes him after he confesses (as he knew they would) and  is set free. Another man is accused of the crime and is about to be sent to prison before Stone is overcome with guilt and convinces the authorities that he did indeed perpetrate the crime and is eventually sent to prison himself. I'm not sure if I recounted the plot exactly. I could check it, but I'll just stick with my own memory of it for now. 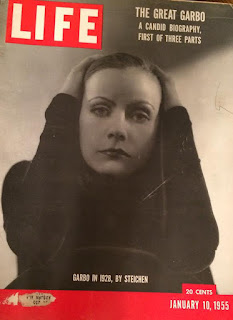 My copy of Life
featuring Garbo on the cover
Posted by 1001: A Film Odyssey is produced, directed and written by Chris, a librarian. at 11:07 AM