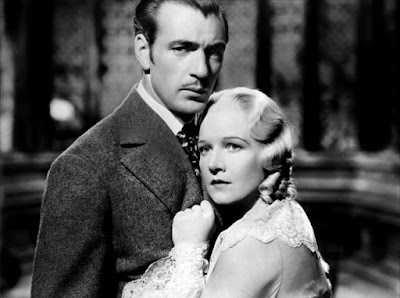 Peter Ibbetson, the story of two lovers who come together against seemingly insurmountable obstacles, has been adapted into a silent movie, a television production and even an opera! The most famous production of the story is this 1935 Paramount screen version with Gary Cooper. The spiritual aspect of true love may be the main reason to watch this today. Cooper's Ibbetson falls in love with Mary (Ann Harding) as a child and then they are separated. They never get over each other and when they are finally reunited, Mary is well off and married to a Duke. But this love is not to be denied! They plan to run off together, but the duke confronts him before Ibbetson kills him in self defense. As you might expect, self defense isn't a good plea when you kill a duke and Peter goes to jail. Space can't separate the lovers, even while Ibbetson is locked away. Eventually death comes to them and they are finally reunited.

It's easy to put this one in the heavy handed category...but I liked what they were trying to do here. It's an unapologetic romance. I'm not too sure this would make my 1001 list, but if I were making a list of unapoletic romatic movies, it would be right up there right behind An Affair to Remember.

And the Elisha Cook Jr. supporting player award goes to...Donald Meek
The appropriately named Meek played a number of meek (for lack of a better choice of words) roles. An aspiring inventor in You Can't Take it With You, a doctor in Captain Blood and perhaps most famously as whiskey drummer Samuel Peacock in John Ford's Stagecoach. His small role as Gary Cooper's boss in Peter Ibbetson is a little different than the others. He is a character with backbone and conviction as opposed to a milquetoast that is played mostly for laughs. Meek, who was actually Scottish by birth, appeared in over a hundred movies during his career. He died in 1946 at the age of 68.

The Meek may not quite inherit the earth
in Peter Ibbetson, but sometimes they
can at least be compassionate 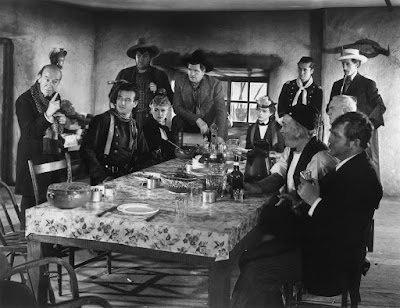 One of the most rootin' tootin'ensemble casts ever rustled up on
the big screen listen to the words of whiskey drummer
Samuel Peacock (Donald Meek) in Stagecoach
Posted by 1001: A Film Odyssey is produced, directed and written by Chris, a librarian. at 11:21 AM