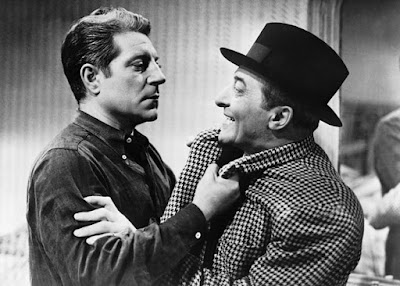 Prototype of film noir is pretty much my impression of this film too. It tells the story of a man who commits a crime which we see the events leading up to it told in flashback. Seeing the story told unfold this way adds an element of style to the film, even if one can argue that it might take away some of the suspense. Directed by Marcel Carne (Director of the wonderful Children of Paradise) and stars French film legend Jean Gabin (Pepe Le Moko, Le Grande Illusion).-C. Cox, 1001: A Film Odyssey
Posted by 1001: A Film Odyssey is produced, directed and written by Chris, a librarian. at 4:51 AM