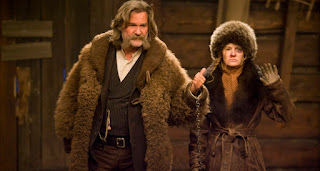 Kurt Russell and Jennifer Jason Leigh
in The Hateful Eight

The Hateful Eight or maybe Agatha Christie's Kill Bill, but set in a Western setting?

A stagecoach with bounty hunter John Ruth (Kurt Russell) and his prisoner (Jennifer Jason Leigh) picks up another bounty hunter (Samuel L. Jackson) and a southern soldier from the war (Walter Goggins) on their trek to the city of Red Rock. Bad weather forces them to stay at a haberdashery who has as guests an assortment of characters, many of whom are not what they seem to be. Who and what these desperadoes are up to is the question of this film, which is well over three hours in the expanded version I saw on Netflix. You can say that Tarantino borrows liberally from other movies...hell!, I even recognized some rehashing of some of Tarantino's own movies like Inglorious Basterds and Reservoir Dogs...but...I found what was going on on the screen compelling enough and the characters interesting enough to never think the running time as being too long... 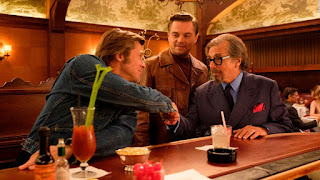 Brad Pitt, Leonardo Di Caprio and Al Pacino
in Once Upon a Time in Hollywood

...This leads us to Tarantino's latest effort, Once Upon a Time in Hollywood. I originally heard about a year ago that Tarantino was making a film about Charles Manson, so it surprised me now that I've seen it that Manson as a character only has a walk on part here. The main plot of the film involves actor Rick Dalton (Leonardo Di Caprio), who is experiencing a similar career arc to Clint Eastwood and his loyal stunt man Cliff (Brad Pitt). The two get involved through being in the wrong place at the wrong time with the Manson family, which comes to a head on August 8, 1969...but not in the way you might think. Shraon Tate (Margot Robbie) is also featured prominently here.

Tarantino certainly has an eye for detail and an intense nostalgia of the time and has created a most entertaining film. I am concerned that the The National Review gave this film such a positive review. I'm going to have to think on that one a bit.

Once Upon a Time in Hollywood has been nominated for ten Oscars, including: Best Picture, Best Actor, Best Director and Best Original Screenplay.
Posted by 1001: A Film Odyssey is produced, directed and written by Chris, a librarian. at 2:34 AM