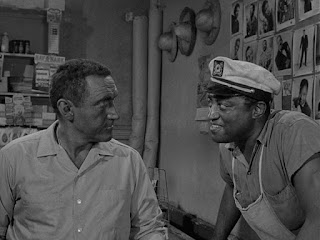 "With James Whitmore blackened to look like and end man in a minstrel show-Black Like Me shows the abuse and mental torment to which this man is exposed when he makes a knowledge-seeking tour through the South."-Bosley Crowther, New York Times, May 23, 1964

Texas journalist John Howard Griffin went into the deep south and posed as a black man in 1959. He wrote about his experiences in the book Black Like Me and the subsequent film. The movie features James Whitmore as Griffin (Horton in the film). Horton comes across as an articulate educated guy when he is white and plays it exactly the same when he goes undercover...just with a darker complexion. He seems to meet an awful lot of bad white people who talk to him like he's garbage and constantly make crass comments about black women folk. Horton becomes despondent about his situation very quickly and wants to quit this experiment. He acts like he's been dropped into a war zone...and maybe he has...Lessons are learned. 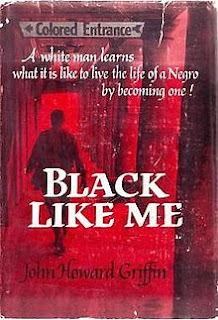 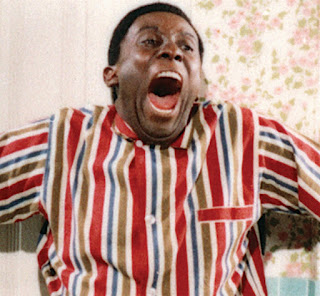 I first caught Watermelon Man on late night TV back when I was in high school. It's about a loud-mouthed white bigoted insurance salesman named Jeff Gerber (Godfrey Cambridge) who wakes up one morning to find out he has turned into a black man. I thought it was funny then and watching the whole thing now, I still think so, with Cambridge landing most of his lines most effectively. I do think at times Herman Raucher's story teeters close to the edge between comedy and drama, but I don't mind that at all. I like the surprisingly serious ending as well, which was a conscious choice by director Melvin Van Peebles and differed from the original concept.

The movie didn't get great reviews, even getting mercilessly panned in The New York Times and seems to be largely forgotten. That is until I recently saw it pop up on Amazon Prime. I say give it a go. 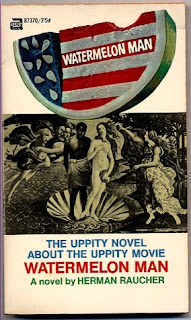 Posted by 1001: A Film Odyssey is produced, directed and written by Chris, a librarian. at 9:15 PM