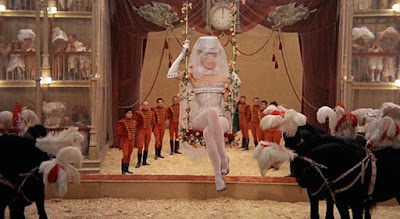 Juliet of the Spirits

"Mr. Fellini is not trying to resolve a mystery. he is trying primarily to give you an exciting experience on the screen, generated by a bold conglomeration of visual an aural stimuli. And that he does, with becoming accretions of humor and poignancy."-Bosley Crowther, New York Times, November 4, 1965.

Ah, Fellini. He's either brilliant and awe inspiring or confusing and mind numbing. Fellini's Juliet of the Spirits has a simple basic plot of a middle-aged married woman's (frequent Fellini muse Guilietta Masina) suspicion that her husband might be having an affair. She experiences a search for incriminating facts and embraces new dimensions of self-awareness through dreams, mediums, psychics, witchcraft, mysticism and a more traditional private detective. I really have to be in the right mood to watch a Fellini film and maybe my mind wasn't totally engaged. However, I did appreciate the "bold conglomeration of visual and aural stimuli" upon reflection. 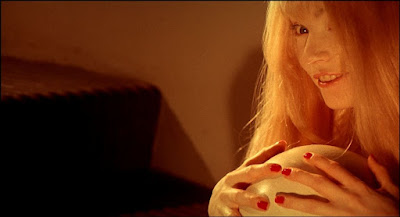 Spirits of the Dead

"Toby Dammit" the first Fellini film to be seen since Juliet of the Spirits is marvelous: a short movie but a major one. I would have never thought Fellini and Poe had much in common, but the Italian director has assimilated his source material in such a way that it has become a kind of postscript to "La Dolce Vita," the picture of an exhausted once beautiful person handing his soul over to the devil."-Vincent Canby, New York Times, September 4, 1969,

Spirits of the Dead features three short films loosely based on stories by Edgar Allen Poe. The first two films, from Roger Vadim and Louis Malle, set a pretty ethereal mood for the storytelling with differing degrees of success. Then we come to the Fellini portion (Toby Dammit) and it is nothing in tone like the other two. The film reminds me a bit of 8 1/2, with an actor replacing the director as the main character.. We also get the smorgasbord of Fellini characters that we have become accustomed to in the just mentioned Juliet of the Spirits and his subsequent Satyricon.

I don't know if I'll ever visit Mr. Fellini again, but I appreciate his original way of telling a story and his creativity. I can't say I get where he's going all the time, but I don't think I'm supposed to. 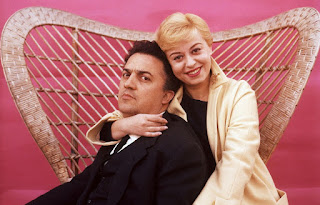