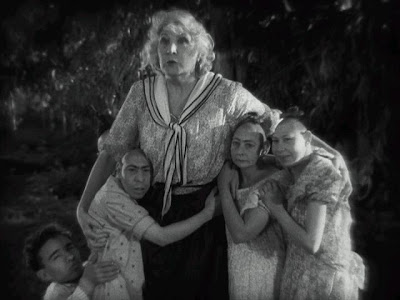 Halloween, 1931. A prototype steel tape recorder that was accidentally left on during the production of the movie Freaks caught this off camera exchange between three of the pinheads known as Elvira, Jenny Lee and Schlitze. We can assume Elvira and Jenny Lee are already sitting down and that Schlitze, by the sound of the rustling canvas, has just joined the other two. We then hear the popping of a canned drink of unknown contents.

Schlitze: Hey girls! That was one rough shoot today. And did you see the way the bearded lady keeps giving me the eye? Definitely not my type at all. But let me tell you, those Siamese twins, the Hilton sisters. They’re a wow!

Elvira: Come on Schlitze! Do you really think she or they’d be interested in a pinhead!

Schlitze: Please. First of all, I prefer to be called ‘microcephalic.’ You girls can refer to yourselves by that term if you want, but don’t drag me down to your level. I got to act respectable as I’m going to be an even bigger star than I already am real soon.

Jenny Lee: Oh, I’m most sorry, Mr. Hollywood. Maybe you should ask the director to roll out a red carpet for you before your takes.

Schlitze: Ha Ha. That reminds me girls. I hear, our director, Mr. Browning, is you know, light in the loafers.

Jenny Lee: I think you’re thinking of James Whale. Whale was Frankenstein. Our man Browning did Dracula. Don’t you even know who your director is?

Schlitze: Hey! So I got mixed up. I really don’t need to be talked down to by a couple of pinheads.

Elvira: He’s right about one thing, Jenny. It was a long day.

Schlitze: Well, it’s not easy working with these people. I keep tripping over Torso Boy. And that girl that drinks holding that glass of beer between her toes. You certainly won’t catch me drinking after that one!

Jenny Lee: Oh get over yourself, Schlitze. And take those sunglasses off. You look ridiculous.

Schlitze: You won’t say that after this movie comes out. It’s going to be a smash. Then we’ll do live performances before screenings.

Schlitze can be heard clearing his throat.

Schlitze: Alas, poor Yorick! I knew him, Horatio, a fellow
of infinite jest, of most excellent fancy.
That’s Hamlet, of course. I could do Shakespeare, Don’t you think?

Elvira and Jenny Lee appear at this point unable to give any verbal response.

Schlitze: Anyway, after this, I’m sure we’re going to have Freaks Number 2 or The Return of Freaks or Son of Freaks or something like that. I don’t make up these titles.

Jenny Lee: I haven’t heard anything remotely like that.

Elvira and Jenny Lee can be heard laughing.

Jenny Lee: Are you kidding? You’re not even four feet tall! Most people think you’re a girl because you wear a dress! And you’re going to get all kissy face with Joan Crawford?

Schlitze: I’m not saying it’s a done deal, but I hear things, so put a lid on all the jokes, will you? I’m telling you, this picture is just a stepping stone. You girls just don’t know how to think big.

Elvira: Come on Schlitz, I can’t even make out your dialogue in any scenes. What is it exactly you are trying to say?

Schlitze: I can see you girls aren’t exactly Ivy League educated. If you had been, you’d know I was speaking Classical Gaelic.

Jenny Lee: You’re crazy Schlitze! This whole movie thing is a one shot deal. Then it’s back to the sideshow.

Schlitze: Are you kidding? Don’t you think the story of a microcephalic’s struggle to deal with a world that doesn’t understand him isn’t going to tear at the heartstrings of millions.

Elvira: Schlitze, this picture is about a midget that is being conned by a trapeze artist and a strongman. We’re just background supporting players.

Schlitze: Now that you mention it, I don’t seem to have many lines befitting a star of my caliber. I‘m going to go call my agent!

At this point, a rustling noise is heard, which we can interpret as Schlitze storming off the set.

Jenny Lee: He’s such a pinhead.

Elvira: You said it.

End of transmission.
Posted by 1001: A Film Odyssey is produced, directed and written by Chris, a librarian. at 8:42 PM