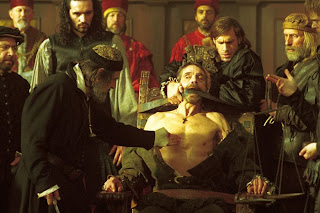 As a bit of a Shakespeare geek, I can’t help but notice the lack of the bard’s adaptations in 1001 Movies You Must See Before You Die. So I suppose I’m going to have to add some of my own, right? So, I may as well start with Michael Radford’s 2004 version of The Merchant of Venice. The film was certainly a critical success.

“Shylock is an intense, passionate character in a great play, and Radford's film does them justice.” Roger Ebert

“Shakespeare's most problematic play at least with respect to modern sensitivities receives an intelligent interpretation from Michael Radford and a superb cast.” A. O. Scott

“This is one of the best adaptations of Shakespeare I’ve ever seen. Pacino’s amazing.”
Richard Roeper

And boasting a strong performance by Hollywood legend Al Pacino and bringing a successful adaptation to theaters a Shakespeare play that had never been put successfully onto the big screen before was quite an accomplishment, right? Of course you should see it, right? I guess that’s it. Nothing more to say. Time to move on to another Hitchcock movie, RIGHT? Or some Czech Republic movie about World War II occupation by Nazis. Or some underground fetish documentary from the 60’s. Lots of movies to see. Time to move on. Time to move on…

If these opinions are allowed to go unchecked…then something really wrong is going on here!

These opinions are out of order!

The whole trial is out of order!

Roger Ebert is out of order!

Richard Roeper is out of order!

The whole critical establishment is out of order!

Maybe the most important aspect of viewing The Merchant of Venice is how one feels about the character of Shylock, the Jewish moneylender who gives a loan to his enemy Antonio, which if forfeited, will constitute a pound coming out of Antonio’s hide.

Is Shylock just an evil snarling Semite who will use the law to gouge out a chunk of the chest of the Christ-like Antonio? (Picture Jeremy Irons praying, looking resigned and accepting of his fate.)

Here are some of Rosenbaums’ criticisms of the film.

Rosenbaum-If one had to devise a production that incorporated just about every technique of evasion, every effort to sanitize the anti-Semitism, it would look something like this film.

Many lines that would cast Shylock in a less favorable light are deleted, such as “I hate him because he is a Christian." Rosenbaum-he edits and invents at will. At Will’s expense, one might say.

Also edited is the scene where Shylock is yelling in the streets and Radford eliminates the dialogue of Shylock lamenting the loss of his ducats in equal measure to the loss of his daughter (Jessica).

Also cut is the line where Shylock wishes his daughter dead and the ducats were in her coffin.

Rosenbaum also talks about Radford’s attempt to contextualize the play at the end. He shows Shylock, after being forced to convert to Christianity, being barred from the synagogue. And we see Jessica gazing off and thinking about the turquoise ring she took from her father Shylock. Trevor Nunn’s version of Merchant has Jessica wailing a Jewish ditty at the end, so contextualizing the ending of this play is not unique to Radford.* (Which Rosenbaum acknowledges). The actual text of the play ends with banter between Antonio, Bassanio, Portia, Nerissa, Gratiano, Lorenzo, and Jessica, but with no mention of Shylock

Rosenbaum also refers to Phillip Roth’s novel Operation Shylock in Roth’s description of Shylock’s first words in Merchant, which, if delivered a certain way, can dig Shylock a hole of unsympathy that he can’t crawl out of.
Roth-Three thousand ducats, Five blunt, unbeautiful English syllables and the stage Jew is elevated to its apogee by a genius (Shakespeare), catapulted into eternal notoriety by “THREE THOUSAND DUCATS.”
Rosenbaum-focusing on those three sibilant words intuitively draws our attention to the unmistakable hiss of the serpent in them.

The Usurer on the Roof quote is pretty funny. And I agree with many of Rosenbaum’s points. It’s clear that Michael Radford wanted to wipe away much of the anti-Semitic dialogue from the film and make Shylock more sympathetic. Radford even begins the film with the opening title cards stating how Jews in 1596 Venice were abused, discriminated against, and forced to become usurers. We even see a usurer thrown over a bridge. When Shylock tries to say something about this, I assume in protest to Antonio, Antonio spits in his face and moves on. (More about Antonio, this model version of Christian sympathy and sacrifice in a moment)

Since I’ve read the play and know what was cut, I’m imagining the dropped lines put back in. I’m imagining Radford’s opening about the persecution of the Jews dropped. I’m imagining spittle coming out of Pacino’s mouth when he says “Three thousand ducats!” I can even imagine Shylock with a pitchfork and cloven hooves if that would help balance the equation. I can look at Shylock as unsympathetic as he could possibly be portrayed…and he’s still preferable to his nemesis Antonio.

First of all, the play does not begin with Antonio spitting in Shylock’s face. However, Shylock’s later dialogue does allude to Antonio’s past abuse, “You call me misbeliever, cutthroat dog, And spit upon my Jewish gabardine.” Antonio doesn’t deny it, in fact he says, “I am as like to call thee so again, To spit on thee again, to spurn thee too.”

The only reason Antonio is talking to Shylock in the first place is because he needs three thousand ducats to pimp off his friend Bassanio to the heiress Portia. (A friend he seems to be a bit overly smitten with. Come on out of the closet already, Antonio! Maybe then you see how you like being a member of an abused minority group of your own!) Now, when Shylock asks for a pound of flesh out of Antonio if the bond is broken, Antonio could have stated the absurdity of such an agreement and walked out the door as Bassanio suggested he do. But the arrogant Antonio immediately agrees, rationalizing he expects to be able to pay the bond three times over.

Moving along, Bassanio wins Portia with the help of the loan. But Antonio’s ships unexpectedly go down and he has to forfeit the bond. Time to pay up! (This is why I never liked Rumpelstiltskin. The dwarf was just coming back for what the Miller’s daughter agreed to. For this he has to literally tear himself in two?)

At Antonio’s hearing over the payment of the bond, Bassanio returns and offers twice the sum of the bond. Too late for Shylock, he wants his pound of flesh. Portia disguised as a doctor (Shakespeare and his cross-dressing!) tries to reason with Shylock with one of Shakespeare’s most memorable speeches:

The quality of mercy is not strained,
It droppeth as the gentle rain from heaven.
Upon the place beneath. It is twice blest;
It blesseth hm that gives and him that takes.

But Shylock won’t be swayed away from his bond, until Portia points out to him another legality that says he can’t shed Christian blood or take more than exactly a pound of flesh.

The bond is forfeit. Antonio, now is in control, has a chance to redeem himself.
He gives Shylock part of his principal income back. (Maybe he’s not so bad after all.)
But with the stipulation that he gives after his death it to Jessica and the Christain thug that swiped her away from her father in the middle of the night (Hey, wait a minute!).
Oh, and one more thing Shylock, says Antonio. You must “presently become a Christian.” (Antonio, you’re just a prick! Did you even hear the quality of mercy is not strained speech?)

So what’s the final verdict?

See the film, decide for yourself.
Read Rosenbaum’s book, but only if you're a Shakespeare geek.
Read Roth’s Operation Shylock, an emotionally draining but excellent work.


* My favorite Shakespeare screen adaptation ending might be from Roman Polanski’s Macbeth, which ends with Donaldbain entering the witches lair, a scene nowhere to be found in the text.
Posted by 1001: A Film Odyssey is produced, directed and written by Chris, a librarian. at 8:10 AM