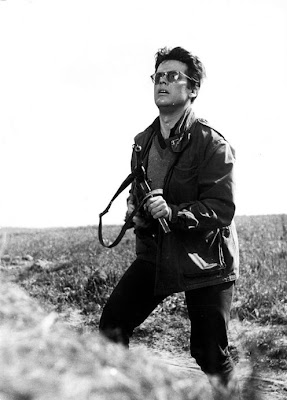 (June 10, 2010) I just finished reading The Shallows: What the Internet is Doing to Our Brains by Nicholas Carr. It is an enlightening book and I recommend it highly. This reading is why I’ve been delinquent on putting up my latest film essay entitled, “Socio-Economic problems in Post World War II Poland and the films of Andrzej Wajda.” Ashes and Diamonds, featuring the Polish James Dean (Zbigniew Cybulski), is of course Wajda’s most noted film, though he is still making films today. I’m going to look over the film once again and finish compiling sources, so I will have to get back to this blog later.

(June 17, 2010) Looking up what I can find on the Internets about the film Ashes and Diamonds. I was doing well when I was using this stack of movie magazines and books to the left of me, but when I started looking at online sources, I’d do all right for a while, but then I’d get sleepy. I guess I’ve been buring the candle at both ends too long. :-(

(June 24 2010) I’m sitting at my computer and am staring at the screen. I know I was going to right something about this movie, I forgot the name of it, I know it’s a Europe thing. When I went to watch it again, I realized it wasn’t in English and couldn’t follow the subtitles. I need to rest. I’m not sure why I have such a big stack of books here to my left, but they make a good place to put my Hardees Milk Shake. Thinking if I should get back to this movie thing. No, not write now. I know! I’ll play that game on Facebook. What’s it called? Tractor Land, that’s it. Looking now. Hey! I Got a knew cow!

(July one 2010)Spended two many time on Tractor Land. I was gonning to doo something else. Something about a movie. See emages of movie. Guy with glassses like JamsDEan has a gun. Aktor. Whatwas his name? Zgyskiii, I think. But Guns are bad. Drunk guy waz funnie.

(Jul 201) progris riport: Don no how ta turn on VDD player. Forgotted what I was going ta do anyhow. Rather go on internnet. Tractor Land. Nead to harvess my pigs. Too busie to right anymore. Insant massage comeing in. Forgetted a lot. No I was trubbled befor now I am happie. playin my game. Be my frien.
Posted by 1001: A Film Odyssey is produced, directed and written by Chris, a librarian. at 5:59 PM