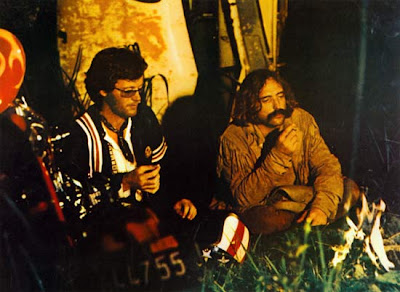 The idea for the film Easy Rider (explored in Bart’s chapter Kaleidoscope of the 60’s) began with a stoned Peter Fonda wanting to make a motorcycle movie in response against an edict by Jack Valenti, who wanted Hollywood to make more wholesome Sound of Music type films (There is a chapter on The Sound of Music in Bart’s book, but that’s another story).
So Fonda got an unproven director (friend and co-star Dennis Hopper) and wrote the film with Hopper and Dr. Strangelove writer Terry Southern. They also brought in a B-movie actor for an important supporting part (some guy named Jack Nicholson). They managed to get it produced and backed by Bert Schneider and Bob Rafelson (the folks that brought you the unusual Monkees’ epic Head). Easy Rider got made on a very tight budget, but became one of the biggest hits of the year.

Watching the movie again today, one might be prone to label it as being dated. Possibly, but I don’t see that as necessarily being a bad thing. It is definitely a product of its time. I don’t think it would have worked coming out in 1967 (too soon) or 1971 (too passé). To use an unfortunate cliché, it caught the zeitgeist of its time (I again apologize for using this phrase).
Many of the scenes, such as their time at a commune (featuring a memorable full circle camera shot of the communers by cinematographer Laszlo Kovacs), the Mardi Gras acid trip and of course the famous café scene filmed with “real” hateful, redneck non-actors are classic. But my favorite scene is still Jack Nicholson smoking his first joint (Peter Fonda: No man, this is grass. Jack: You mean marijuana?) and rambling on and on about extra-terrestrials that are living among us.
Lets also not forget about the great soundtrack (Dylan, Hendrix, The Band and, of course, the classic “Don’t Bogart That Joint my Friend.” by The Fraternity of Man.)
And if you’re looking for a movie that represents the zeitgeist of 1969 (Damn, there’s that phrase again!), I don’t think you’ll find a more fitting one than this one.

I looked over a list of other movies released in 1969. Here are some that didn’t make the 1001 Movies You Must See Before You Die cut.

1. Bob and Carol and Ted and Alice-A big hit at the time, I’m sure this rather odd wife swapping movie would also be dated, but I fear not in a good way. And does anyone remember when Elliot Gould was a really big star?
2. Goodbye, Columbus-based on Phillip Roth’s novella, this feels to me like a more Jewish version of The Graduate. Though not as good as The Graduate, not a bad film in its own right. And does anyone remember when Ali McGraw was a really big star?
3. If It’s Tuesday, This Must Be Belgium-Three things I remember about this American tourists traveling by bus through Europe movie: 1) The theme song was catchy. 2) It had a slew of 60’s and 70’s character actors in it (Michael Constantine, Norman Fell etc.) 3) Suzanne Pleshette looked gorgeous.
4. The Love Bug-How I did love this movie as a kid. Rock on, Buddy Hackett!
5. The Magic Christian-Like Easy Rider, another screenwriting credit to Terry Southern. This strange, trippy move has Peter Sellers adopting Ringo Starr or something and I remember something about Laurence Harvey stripping and Raquel Welch dressed as a Viking and what was this movie about again? It’s been awhile since I’ve seen it, I guess. What a long, strange trip it’s been.
6. On Her Majesty’s Secret Service- James Bond finally gets married and Bond has to be played by George Lazenby? Sounds like grounds for an annulment to me.
7. Take the Money and Run-Woody Allen’s first starring role, this semi-documentary of a criminal is definitely one of his “early, funny ones.”
8. Alice’s Restaurant-Arlo Guthrie’s famous twenty-plus minute song translated into a movie. Dare I say this movie might be dated if viewed today?
9. Paint Your Wagon-Gotta love Clint Eastwood, but I really could do without hearing his rendition of “They Call the Wind Maria.” What next? Charles Bronson singing “The Farmer and The Cowman Should Be Friends?”
10. Winning-The only memorable thing to me is about this Paul Newman/Joanne Woodward racing pic is the theme song, to be forever played in years to come on Wide World of Sports.
Duh-Duh Duh-Duh Duh-Duh Duh-Duh Duh-Duh-Duh Duh-Duh-Duh
Duh-Duh Duh-Duh Duh-Duh Duh-Duh Duh-Duh-Duh Duh-Duh-Duh…

And finally, another entry that is in the 1001 Movie book from 1969 is the Costa-Gavras thriller Z. The 60’s, of course, had many high profile political assassinations and this film recreates this by showing the mechanics of the assassination of a charismatic Greek politician and the political conspiracy that lies underneath it. The details of the plot are a little hard to keep up with, but Z is well worth the effort. 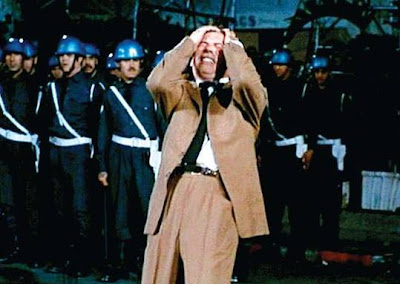 Posted by 1001: A Film Odyssey is produced, directed and written by Chris, a librarian. at 2:22 PM