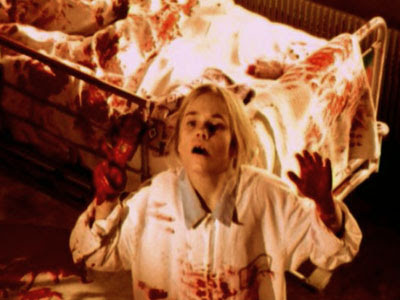 Riget (The Kingdom)
You would think I’d have something to say one way or the other about Lars Von Trier’s five-hour Danish mini-series, which has been aptly described as Twin Peaks meets ER and doesn’t even resolve itself, even after 280 minutes! Like I might question why this was included in the 1001 movie book in the first place, but I just can’t quite put any of these thoughts into words. So instead for your reading pleasure or displeasure (whatever the case my be), I present my award* winning 500 words or less short story, The Choosers because I just don’t know what else to do.

He paced…and paced…and paced.
“Jerzy! You are making me crazy!” Felicia spoke sharply to her husband.
“What the HELL am I supposed to do?”
“If you keep using foul language like that it won’t matter, because they write you off if you talk like a low class swabie!”
Jerzy slumped into the greenroom portaseat. “I need some Coffea arabica!”
“No, love! Let’s save the genetic enhancers for another time They are probably watching us.” Jerzy put his arm around her and gave her a look that let her know that she was the most important thing in the universe to him. She instilled in him a feeling of comfort that showed that life would go on no matter how this meeting went.

A large pink-hued woman in the traditional red and black cape came out and told them they were next. The woman's namingplate read Sasha, though more than likely that ID was given to her once she became a part of the organization.
Jerzy quivered as he took Felicia's arm and followed Sasha through the sterile, impersonal bioways leading to the Choosers facilitation station.
There were usually two animatroid units surrounding all Choosers stations and Sasha gave them the couples’ DNA samples. The animatroids took only a parsec to compute the samples, which lit up, opening the door to the Chooser’s station. The units took the couple by the arm, as gently as animatroids were able to and led them inside.
Once inside a medium sized man with a hookline scar and an eye shield leaned over his platform. "Welcome Mr. And Mrs. Franklin, I've been looking forward to meeting you!"

The animatroids led the Franklins to the station portaseats where Jerzy tried to take the measure of the man before them. The man scratched on a protomag that had settled on his hookline scar as he reached and gave Jerzy a firm handshake. This Chooser reminded him of spare parts dealers he used to deal with in the Delta region. His expectation of what a Chooser had been was somewhat higher than the backhoed con jobber before him now.

“The results are in and Mr. Franklin.” The Chooser beamed. “You have been accepted!”
Jerzy extended his hands skyward, “Praise Fatima!”
His wife stood and hugged him with tears in her eyes as the Chooser spoke again. “Oh, And Mrs. Franklin…you have been rejected.”
Felicia fell onto the landing missing her portaseat completely. Jerzy’s first instinct was to comfort her, but he saw the Chooser sign with his thumb and Jerzy grabbed a sideblade from one of the animatroids. Without further hesitation he plunged it into the chest of his unsuspecting wife. The instrument retracted back into its casing after making an opening that went completely through her. Her lifeless body dropped to the floor as he handed the weapon back to the unit. Jerzy scratched his head, not knowing what to feel.

“Smile, Mr. Franklin”, The Chooser said. “We’ll find someone more suitable for you next time.”

*Golden Peabody Short Story Award of 2002 or something like that.

And I did like Riget (The Kingdom), it just seems like an odd inclusion for the 1001 canon.
Posted by 1001: A Film Odyssey is produced, directed and written by Chris, a librarian. at 9:54 AM