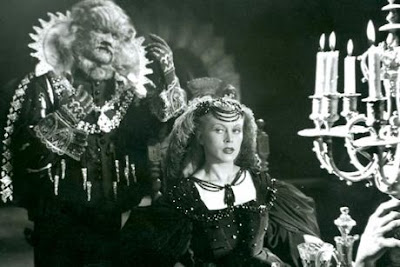 When I was about nine or so, I saw that a version of the old fairy tale Beauty and the Beast was coming on TV. This was most exciting news. I wondered how scary the beast might be. It was a time and an age you could still be scared by things like that.

It was on PBS, if memory serves, but it was in black and white! Our spectacular new color TV made me not want to watch anything black and white at that moment.

But then again, plenty of Abbott and Costello movies that I liked were in black and white. I could still remember before last year, when everything on TV was in black and white. It was such a shock when I saw The Wizard of Oz this year magically turn to color when Dorothy went to Munchkinland.

Beauty and the Beast was starting. I watched. Oh, my. This was in a foreign language and I didn’t speak French! You mean I had to read and watch a movie at the same time? “Okay, I’ll do it,” I said. But that Beast better be really frightening.

Finally we got to a scene with the Beast. He was pretty scary despite wearing ruffles, but guess what? He spoke French, too! I watched the Beast’s scene, but once there was a scene without him, I turned it off.

So it took me over thirty years to finally watch it again. I’ve seen hundreds of black and white movies since-that’s no problem. I’ve seen many movies in French-that’s no problem, either. But now this movie has to compete with my image of the Disney Beauty and the Beast, which I’ve seen so many times.

There are shady characters in the Cocteau version, though none as dastardly as Disney’s Gaston. I can live with that, though I do miss Gaston’s songs.

There are some funny characters in Cocteau’s film (Belle’s sisters), but they can’t really compete with a wisecracking candlestick or a dancing teapot. But I guess, I can live with that.

I’ve just got to realize that the Cocteau film is a just a subtler movie experience …but I can live with that and hope I don’t have to wait another thirty years before I see it again.
Posted by 1001: A Film Odyssey is produced, directed and written by Chris, a librarian. at 3:26 PM