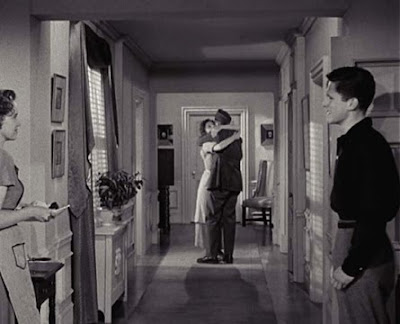 Here’s the scene where…

I’ve just finished watching the scene from The Best Years of Our Lives where soda jerk Dana Andrews encounters a customer that questioned his friend Harold Russell's wisdom in participating in a war that cost him his hands. Dana punches the customer, who falls through a glass case and Dana is fired. "The customer is always right, but this customer wasn't.”

So I made a list of 20 Here’s the scene where… moments.
Not necessarily a TOP 20, just 20 that come to my head

The sequel ain’t bad either.
2) The Godfather II
Here’s the scene where …Freddo whines to his brother how he's smart and was
passed over in the chain of command. Michael Corleone admonishes him.
"Your not a brother, you're not a friend. If you come to visit our mother, I want to know a day in advance so I know not to be there.”

When you see a movie dozens of time in your youth and practically have it memorized,it’s going to have its share of here’s the scene where moments.
4) Animal House
Here’s the scene where …they have a cafeteria food fight or the Delta House invades the parade or they go to the grocery store in Flounder’s brother’s car or they steal Niedermeyer’s horse or they go see Otis Day and the Nights…You get the idea.

Great transcendental moment scenes from important movies of their era
6) Easy Rider
Here’s the scene where …Jack Nicholson smokes pot for the first time
and discusses the aliens living among us. The scene in the cafeteria with
the rednecks is a pretty good here’s the scene where …moment as well.

If it’s the most famous scene in movie history, it should be on the list.
8) Casablanca
Here’s the scene where …a drunk Humphrey Bogart asks Sam to play As Time Goes By.“Play it, you played it for her.”

Just one more Bogart scene
9) The Caine Mutiny
Here’s the scene where …Captain Queeg goes nuts on the witness stand and rails on about his missing strawberries. Though I think I’ve seen Rich Little’s impression of Bogart doingthis scene enough times to satisfy myself for one lifetime.

You could fill this list with movie courtroom scenes.
10) Inherit the Wind
Here’s the scene where …Spencer Tracy/Clarence Darrow puts Frederic March/Williams Jennings Bryant on the stand and questions him about evolution. I pretty much have to watch this scene in its entirety every time it comes on.

Great endings, of course
13) The Passenger
Here’s the scene where …well, it’s the ending, can't really describe it, you just have to see it.

Scenes that have been shown so much over time that they have to be on
this list whether you like it or not.(Note: Didn’t mean to imply I didn’t like Five Easy Pieces because I do.)
14) Five Easy Pieces
Here’s the scene where …Jack Nicholson orders lunch, but doesn’t want what is on the menu!

Great transcendental moment scenes from movies from your childhood that made you
not be able to sleep the night after you first saw it.
15) The Exorcist
Here’s the scene where …her head spins around and she’s spitting up some kind of green…I can’t watch anymore!

Some scenes you don’t remember that you remember but if the movie comes on it triggers something in your brain that makes you remember that theres a Here’s the scene where moment coming up.
16) National Lampoon's Vacation
Here’s the scene where … the Chevy Chase family parks at the end of the parking lot at Wally World and jog to the Chariots of Fire theme only to reach the park entrance and find that it’s closed.

If someone you are with hasn’t seen the movie in question, a here’s the scene where …moment may answer certain pressing questions.
19) Singin' in the Rain
Wife: Why is this movie called Singin’ in the Rain?
Husband: Because there is a scene where he sings in the rain!
Wife: I don’t believe you!
Husband: Wait for it. Wait for it. Here’s the scene where …he sings in the rain!
Wife: Wow, you were right. I thought Singin’ in the Rain was a metaphor like in the movie The Boy Who Was Ten Feet Tall. He wasn’t really ten feet tall, you know.
Husband: And you were wrong.
Wife: I bow to your superior knowledge
Husband: As you should.

20) And one more from The Best Years of Our Lives
Here’s the scene where …Frederic March comes home from the war and sees his family for the first time. This scene is early in the movie, but try to stick around for the whole movie if you haven’t seen it.
Posted by 1001: A Film Odyssey is produced, directed and written by Chris, a librarian. at 11:45 AM