Favorite movie from the top 5: Return of the Jedi. Hard for me to choose between Return of the Jedi, Terms of Endearment and Trading Places. You have a science fiction movie, a family drama and a comedy. Apple vs. Oranges vs. Avocados. But since Jedi is my favorite of the Star Wars trilogy, I'm going with that one. However, if we are talking about the updated version of Jedi where the apparitions at the end of the film are Yoda, Obi Wan and the young Anakin from the second trilogy!!, I'm choosing Terms of Endearment just for spite.

Return of the Jedi (Acceptable ending)

Return of the Jedi (Unacceptable ending)

Least favorite movie from the top 5: War Games. I'd rate the battle for last of the top five as a toss-up between War Games and Flashdance. I always thought War Games was overrated when it became a hit. It's not bad, but I was never really wild about it. Maybe I just need to see it again, though I don't have much of a desire to do so. Flashdance was a popular movie that is pretty easy to make fun of. The screenplay for Flashdance was written by Joe Eszterhas. And since I recently enjoyed his book The Devil's Guide to Hollywood: The Screenwriter as God, I can't put his movie at the bottom. I know that isn't the best reasoning, but sorry War Games, you lose! 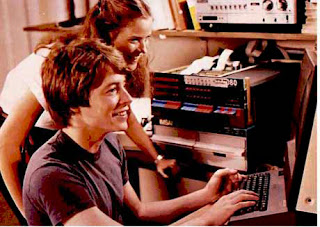 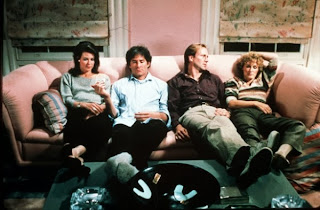 The Big Chill may be best viewed alongside of the similarly themed (and earlier) The Return of the Secaucus Seven.

The Right Stuff #33
I had to think a bit about my favorite movie of 1983 from the top 5 at the box office, but I won't hedge on naming The Right Stuff as my favorite film from that year. Of course, growing up in an age where the Mercury and Apollo astronauts were revered definitely puts a bias in me from the beginning. Tom Wolfe's book strongly emphasizes the Cold War aspect of the story of the Mercury Seven (and Chuck Yeager). The film stresses that too, but the individuality of the characters and the heroism of their mission is what comes through to me and puts it at the top of my 1983 list. And when Chuck Yeager emerges from the wreckage of a burning plane at the end of the movie, well, how can you not feel the testosterone drip off the screen?