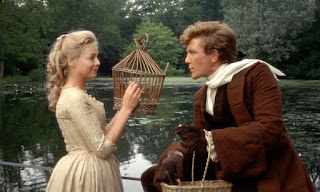 
"Prepare yourself for what is surely one of the wildest, bawdiest and funniest comedies that a refreshingly agile filmmaker has ever brought to the screen."-Bosley Crowther, New York Times, October 8. 1963

"Tom Jones is a mess, sometimes called a romp, and a tribute as much as anything to the sudden new appetite for things English."-David Thomson, Have You Seen...?

Yes, the bawdy romp that is Tom Jones seems to have its fans as well as its detractors. Interesting that I've never gotten around to seeing it before. In fact, I can hardly remember it ever being on TV over the years...at least not often. Seen now, it's an interesting transition British film when the country went from making serious early 60's English films such as Saturday Night and Sunday Morning (also starring Finney) to the Swingin' London films of the later 60's, such as Morgan: A Suitable Case for Treatment (starring David Warner of Tom Jones).

Tom Jones is a fun film especially for those who like period pieces, though the "bawdiness" of the film seems quite subdued by modern standards.

What's New Pussycat?: The Welsh singer Thomas Woodward was rechristened as "Tom Jones" after the success of the movie of the same name. I'm pretty sure more people in recent years are more familiar with the singer Tom Jones than the movie Tom Jones, let alone the original novel by Henry Fielding! But it's not unusual, I guess. 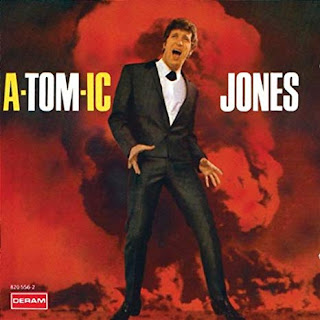 None of the Best Picture Nominees for this year made the 1001 book.

In his Alternative Oscar book, Danny Peary awarded no Academy Award winner for 1963. The only year he gave it to no winner. (Though 8 1/2, Hud and The Great Escape seem like potentially worthy choices to me.)

A Little Love for Susannah York, Please!: The five acting Oscar nominees for Tom Jones did not include leading lady Susannah York. She went on to have a very fine career in motion pictures, but never received an Academy Award nomination for Best Actess during her career.

Sometimes it Pays to Look Back in Anger: John Osborne was awarded the Best Screenplay Oscar for Tom Jones and had his play Luther win the Tony for Best Play the same year! The original West End production of Luther starred Albert Finney. The 1973 film version featured Hugh Griffith in a supporting role. Tom Jones director Tony Richardson also directed Luther on the stage. 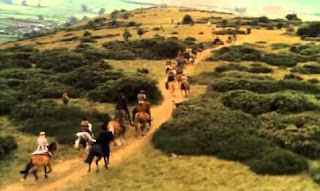 The hunting scene shot largely from a helicopter
in Tom Jones

Tomorrow: The final Best Picture winner that I have never seen before!
Posted by 1001: A Film Odyssey is produced, directed and written by Chris, a librarian. at 6:00 AM