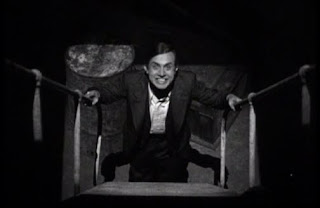 Librarian’s Journal
(January 7)
I was in a state of great consternation when I saw the Count again. My fear was he and all that surrounded him would be too slow moving, that his pacing would be too static. These were justifiable fears, but I must say I found him to be largely accessible. Iconic is a word bandied about and I think my time with the Count reinforces that thinking with me as well. Other Counts have come and gone and some have made a lasting impression, but our image is now and will probably always be of this Count.

His castle was a wonder. The swirling stone steps, the giant cobwebs, the candles, the armadillos. The armadillos? I confess I have never seen a castle with armadillos before and I don’t know how they got there, but I hope it is a sight I will never see again. The three women of the night will be filling my dreams for a fortnight, I’m sure. Whether for good or for evil, God only knows.

But the count, the women, the castle and the armadillos were outdone by one. The one who made the greatest impression on me. The one referred to below.

Librarian’s letter to the late Dwight Frye
(January 9)
Dear Mr. Frye,
I understand that you left this plane in 1943, but I hope you can somehow get the message that you are so cool! Love your laugh and your crazy smile and did you know that Alice Cooper wrote a song about you? I love that song Billion Dollar Babies . Do you like Billion Dollar Babies, Dwight? May I call you Dwight? Sorry about that whole typecasting thing and lack of roles after Dracula, but honestly, who would ever remember you if you played a kindly clergyman in some Robert Montgomery melodrama or the renegade brother in a Fred MacMurray/Claudette Colbert historical romance?
But we remember Renfield. Yes, we do!
In conclusion, just let me reiterate: RENFIELD RULES!

Librarian’s Correspondence to the Criterion Collection
(January 8)
Dear Criterion,
Another excellent job with The Dracula Legacy Collection. Restoration was a success. Version with Phillip Glass musical store, though interesting, proved to be too much over the long hall. The commentary with Dark Carnival author David Skal was very good. He incorporated the Bram Stoker novel in the discussion at all the right times. The documentary about the evolution of Dracula from original conception to 1931 film was informative. Other movies included: Son of Dracula (Sorry, Lon Chaney Jr. is NOT Dracula), Dracula’s Daughter (Missed Lugosi and Frye in this one and who is Gloria Holden again?), House of Dracula (Just throw all the monster in and see if any of them stick) and the Spanish version of Dracula (This was the best of all the extra movies, and is a must for Dracula buffs and not just for the scantily dressed Lupita Tovar..) Good work Criterion. We’ll meet again.

Memorandum
(January 10)
From Hungerdunger, Hungerdunger, Hungerdunger, and McCormick M. D. M. R. C. S. L. K. Q. C. P. I ETC, ETC, ET AL, ET AL, vis-à-vis, i.e., in lieu, to wit, semi colon, ipso facto, quote unquote.
Gentleman? (On the penultimate not on the diphonic)
Forgive me, I need to brush up on my Transylvanian, so get a Transylvanian and brush up on him. In relation to the letter, remember to not leave out the body. Which isn’t a given when you’re dealing with Vampires. So, leave the body and mark it fra-jilly. If you can’t spell it, look it up under fragile. Let’s also include 2 quotes. Which makes four pints. Four pints? Well, that takes care of dinner for the evening. And that reminds me of the time I shot a vampire in my pajamas. How he got in my pajamas I’ll never know. I was saying something about sending the soil from my homeland to London. But I made two carbon copies of this letter and threw the original away. Then I threw the carbon copies away.

Regards…
Posted by 1001: A Film Odyssey is produced, directed and written by Chris, a librarian. at 7:30 PM