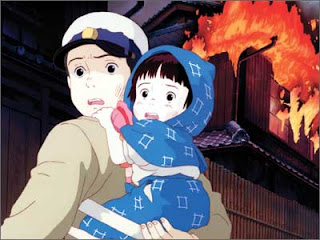 I admit to being pretty much a novice when it comes Anime. So, I decided to check a scholarly source* which describes anime as being : a style of animation originating in Japan that is characterized by stark colorful graphics depicting vibrant characters in action-filled plots often with fantastic or futuristic themes. Well, that seems to serve my purposes well enough. And Manga is when you draw it, right? Once again, that’s sufficient. I still use the term Japanimation, though I’m not sure you can use that anymore.

Anyway, I grew up watching shows like Kimba, the White Lion (Which was later Xeroxed by Disney for The Lion King) , Astro Boy (Which I thought was cool simply because what boy wouldn’t want to fly?) and Speed Racer (Which, even when I was six, found far fetched that Speed could solve a crime in the middle of a race, and still have time to return and win the very same race after race by a hair. It’s okay for Speed to finish fourth or fifth Trans-Lux!, He just caught a gang of poachers after all! Keep it real!)
Later entries in amime I am somewhat familiar with are the exaggerated Sailor Moon (Girlame, if there is such a word) and One Piece (which seemed typical of the type to me with the exaggerated movements and mannerisms) and of course Pokemon, (Which is basically impossible for an adult to understand. An adult understanding Pokemon…It’s like try to talk to the fuzz about what’s cool, you dig?)

So my expectations for Mizuchi’s Princess Mononoke wasn’t necessarily high or low, but I must say I enjoyed more than I thought I would. A farfetched fantasy adventure story for sure, but none of the exaggerated silliness of tears flying out of faces or the characters sporting smiles that should swallow their entire face if logic were to hold.

Not that the plot was always easy to follow. Their were a lot of gray areas as to who the good guys and bad guys were at different times. (But that’s a good thing, right?) And Billy Bob Thornton supplying the voice as a Japanese monk on the English dub was more than a little disconcerting.
Still worthwhile for fans of fantasy anime and ex-prostitutes turned smelters, lepers turned gunmakers, enigmatic boars, wolves and tree monkeys (I think they were monkeys, but the images are starting to run together. I knew I should have written this blog sooner after seeing it.)

The only animation I can recall as depressing as Isao Takahata’s Grave of the Fireflies might be Watership Down, which I’m sure isn’t as dark as this. A brother and sister in Japan at the end of World War II, try to survive after the firebombing of their city and their parents die or are unreachable. Not for everyone, that’s for sure, but a powerful film. Roger Ebert sees part of the film’s success stemming from “the lack of visual realism in his animated characters allows our imagination more play; freed from the literal fact of real actors, we can more easily merge the characters with our own associations.”

“What he said,” I add, while pointing at Roger Ebert. 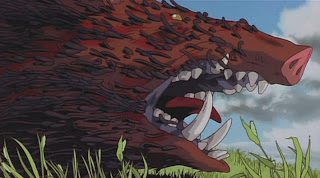 Posted by 1001: A Film Odyssey is produced, directed and written by Chris, a librarian. at 6:09 PM