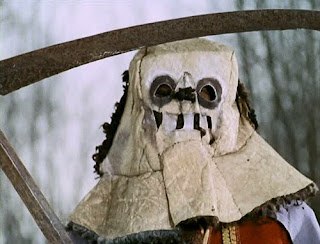 Husband: I’ve got, um, another movie.

Wife: It’s got to be a step up from the last one. You know, that Pommegranate one from that Armenian dude. What was his name?

Wife: Yeah. I don’t even want to think about it. The first level of purgatory is probably filled with screenings of what’s his name again?

Wife: Right. Let’s put that one behind us. What’s this film about?

Wife: Uh, what. (She grabs the DVD case from his hands and begins reading the label) Shadows of Forgotten Ancestors directed by Sergei-oh no! Not another artsy-fartsy Ukranian love-in!

Husband: I resent that. This film has a pretty straight narrative. Besides you’ve got to learn to live outside the box a little more and appreciate artistic interpretation.

Wife: Oh, please! I suppose we could go out in the yard and stare at a pile of poo and render an artistic interpretation of it…Wait a minute.

Wife: I would never say ‘pile of pooh.’ That’s going too far.

Husband: What do you mean? You have to say it. It’s my blog. I’m the one writing this!

Wife: No. It was bad enough you made me say artsy-fartsy, but I draw the line at ‘pile of poo.’ I think I’m going to go take a bubble bath. Enjoy your movie.

(She leaves the room and closes the door behind her.)

Husband: Honey! Could you come back? (He knocks on the door) Honey? I’m sorry I made you say ‘pile of poo.’ Are you still there? Honey? Okay, fine! I’ll just watch Shadows of Forgotten Ancestors by myself!

(The man’s daughter comes through the opposite door)

Father: Hey, sweet pea. You want to watch a movie with your old dad?

Daughter: Is this another one of your artsy-fartsy blog movies?

Father: You just said artsy-fartsy. I didn't force you to say that, did I? I want to make sure that you don’t have a problem saying artsy-fartsy. And what's your opinion on pile of poo?

Daughter: Pile of what?

Father: Never mind.
(Loudly, hoping wife might overhear) I’m just glad that you’re being a little more cooperative than your mother. Now, have a seat.

Father: What are you talking about?

Daughter: Mom would really scold me if I cussed…

Father: Who said anything about making you cuss? Besides, you wouldn’t actually be cussing if I did have you cuss, because I’m the one who’s writing this!
Forget it! Let’s just watch the movie.

Father: What did you think?

Daughter: Colorful. Lots of snow. Lots of red. Big moustaches. And why so many goats? The romance was interesting.

Father: No, it’s not like the Summerians. I don’t think so anyway. But overall what did you think? Did it speak to you in any kind of artistic way? Personally, I thought the narrative was crisp. And this director’s eye for images is really starting to grow on me. I can honestly say I’m coming around to the Parajanov camp. Of course, the last part was a little bit, what’s the word?

Daughter: Yeah, that part at the end was a load of….Hey, wait a minute!

Daughter: I was about to say load of…and then a bad word. You were going to make me cuss. Weren’t you?

Father: No! I was not going to make you cuss!

Daughter: I’m telling mom! You were going to make me cuss. She’ll never get me my Nintendo DS now!

(Daughter storms out of the room as the father stares at the door after she closes it behind her. After a minute, the man's Golden Retriever comes into the room and nestles beside him.)

Dog Owner: (He pets her) Hey, girl. I know I’ve got someone who won’t run out on me when the going gets tough. What’s say you and me watch the extras of Shadows of Forgotten Ancestors?

(The dog looks up at him confused and walks away, but not before depositing a ‘pile of poo’ on the carpet in front of him)
Posted by 1001: A Film Odyssey is produced, directed and written by Chris, a librarian. at 6:04 AM