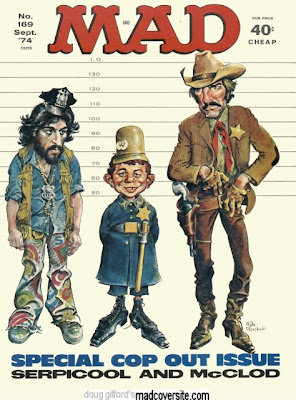 In case you didn’t know, Serpico stars Al Pacino as an honest New York City cop who is unwilling to take bribes and be part of the corruption rampant on the police force.

As a boy growing up in the 70’s, there was one literary source above all others that most influenced my cultural, political and even at times, spiritual growth. I am talking, of course, about MAD magazine. Each issue featured those those silly, but funny Don Martin cartoons, Dave Berg’s Lighter Side, Al Jaffe’s Snappy Answers to Stupid Questions, the drawings of Serigo Aragones scattered all around the pages, and those crazy mad fold-ins where a picture of one thing magically turns into something else!

And of course there were those Nixon jokes! Oh, the Nixon jokes! These jokes would usually entail something along the line of Richard Nixon as a boy dressed as George Washington with a chopped down cherry tree in front of him and an ax hidden behind his back, with the caption reading, “I cannot tell a lie, I DIDN'T DO IT!” I think if someone were to look through all the issues of MAD’s 1972-1974 heyday* and counted up all the Nixon/Watergate/White House tapes stories, well I’ll save that research for someone else, but I know it would be a hell of a lot.

But the highlight of most of the issues from this time for me was the television or movie satires. Your movie couldn't be qualified a success in my eyes until MAD did a satire of it (There were exceptions to this success barometer, as MAD did a satire of the 70’s musical megaflop Lost Horizon).

The movie satire was usually seven pages long and unlike MAD’s cheaper imitators Cracked and Sick, MAD’s writers actually seemed to have not only seen the movies but were satirizing particular scenes! Hats off to writers like Stan Hart. And of course, the artwork by Mort Drucker is nothing short of legendary (I realize that’s overstating it a bit, but bear with me).

All right. Let’s see if I can find an old copy of a MAD magazine. Well, what do you know. I found one! September 1974, (Issue 169. 40 cents. Cheap!)
“Special Cop Out issue,” it reads, “Serpicool and McClod.” Ah, yes. I knew I was writing this after seeing Serpico for a reason. I’ll leave the ruminations about the McCloud satire for another day.

Of course, all the movies satirized in MAD had those ridiculous names: The Godfather was the Odd Father. Billy Jack was Billy Jock (I was sure they were going to call him Billy Jerk). The Poseidon Adventure was The Poopsidedown Adventure, Papillion was Popicorn, The Exorcist was The Ecchorcist (and came equipped with its own barf bag!), A Clockwork Orange was A Crockwork Lemon, The Way We Were was The Way We Bore and Serpico was Serpicool.

Here are some Serpicool jokes from the panels of MAD:

At Serpicool’s Police Academy Graduation, the photographer is taking a group picture of Serpicool’s family.
Photographer: Okay, everybody move in close for a family picture. Make room for our man in uniform.
As he reveals the picture…
Photographer: Hey; I didn’t mean THIS kind of FAMILY picture! (The picture revealed is not of Serpicool’s family, but of Micheal Corleone and the Corleone crime family! You see, MAD knew her sophisticated young readers would understand The Godfather reference!)

As Serpicool is tackling a fleeing black youth.
Cop 1: I really can’t believe this!
Serpicool: Why? Because I’m a dedicated, honest cop?
Cop 1: No. Because you’re such a lard-tailed bandy-legged shrimp and you just outran a kid built like O. J. SIMPSON! (Topical reference to popular athlete of the day)

Serpicool talking to a cop ally…
Serpicool: Everytime I make a phone call to the department, I make a tape of the conversation! Listen to this one (He plays the tape)
Cop 2: I don’t hear ANYTHING. There’s nothing ON the tape.
Serpicool: Oh, this must be the time I called The White House by mistake! (Watergate joke number two-hundred and thirty-seven of 1974)

Serpicools final frame after he gets hit by a speeding car…
Serpicool: Hey, why’d you do that?
Dirty Harry: Because you tried to give the cops a bad name. And that’s DIRTY HARRY’S job! (Final frame would often have “zinger” delivered by someone from different movie.)

MAD inspired me to start my own magazine in 1974. That maybe overstating it a bit. I just did a few issues on notebook paper and the run lasted for only nine issues.Let’s see if I can find any of them. Well, here’s one! Jeez, Do I throw anything away? Anyway here’s my 1st issue. It was called IDIOT magazine and featured a character named Elwood, sort of like, MAD’s Alfred E. Newman.. Let’s see what my first movie satire is. What a coincidence! It’s of Serpico! Except mine is called JERKICO!**

Give me a moment to read it…All right, I’m not even sure what I’m trying to say here, really. The plot has Officer Stank Jerkico getting fired from the police force. He tries to shoot his boss, but only has a water pistol, so he doesn’t kill him, you see. Then, out of a job, he meets Peter Pan on the street who tries to give him some peanut butter. He tries to shoot him with a water gun as a joke, but the gun is loaded and Peter Pan dies! Jerkico ends up in prison in the last frame. OK, I don’t really get it. Maybe I was just trying to say life is full of bad breaks, but when things appear to be as awful as it can get, something even worse can happen. Yeah, let’s just go with that.

* MAD’s official heyday was 1974. I accept no views to the contrary.
**I admit to occasionally calling people Jerkico’s to this day, usually when I’m in traffic. 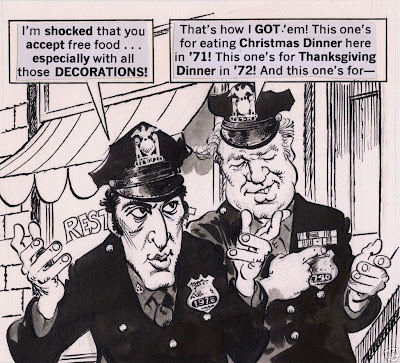 Posted by 1001: A Film Odyssey is produced, directed and written by Chris, a librarian. at 3:10 PM