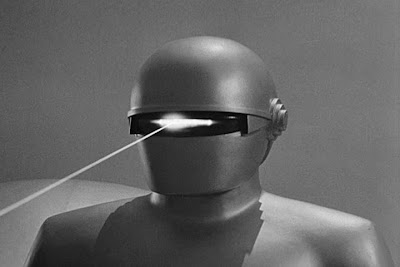 Remembrance of Viewings Past: I was probably about five. I was watching this on television during the days when they actually showed black and white movies on television! I remember the robot policeman Gort coming after Patricia Neal and have never been so scared while watching a movie since.

A one sentence synopsis of the movie might be: Space alien Klaatu comes to Earth and tells the citizens of the planet that if they continue to expand their atomic experiments into outer space, they will have to be eliminated.

As Klaatu said:
Your choice is simple.
Join us and live in peace
Or pursue your present course and face obliteration.
We shall be waiting for your answer.
The decision rests with you.

As Klaatu also said:
Those are great words.
Posted by 1001: A Film Odyssey is produced, directed and written by Chris, a librarian. at 5:37 PM